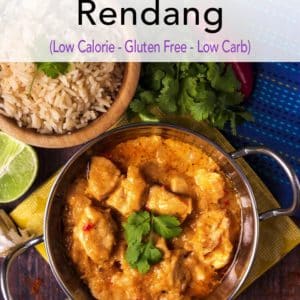 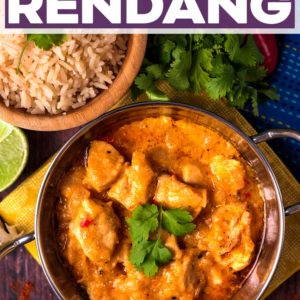 Rendang is a tasty and flavourful Indonesian dish that is kind of like a creamy spiced coconut chicken stew. This Chicken Rendang also known as Rendang Ayam, is simple and delicious and ready in under an hour.

Considered by many to be the most delicious meal in the world, a Rendang is a mix of chicken or beef, spices and coconut milk, cooked low and slow.

The slow cooking process, until the liquid has almost disappeared, means this stew is absolutely full of flavour. You don't want to rush it, but it is worth the wait.

Rendang is an Indonesian spicy meat, most commonly using beef, but other meats are used, such as lamb, goat or chicken, like we have used here. The dish originated in West Sumatra, Indonesia and has spread across Indonesia to the cuisines of many Southeast Asian countries.

Although many people describe Rendang as a curry, it is actually a stew. It is not considered a curry in Indonesia as it is richer in flavour and has less liquid.

An online poll by CNN, of over 35,000 people, chose Rendang as the number 1 most delicious dish of the world.

How to make chicken rendang - Step by step

One: Make the paste by pounding the paste ingredients in a pestle and mortar. Set aside.

Two: Heat the oil in a pan and cook the chicken until browned all over, about 5-7 minutes.

Three: Add the onions and cook until onions are golden brown, about 5 minutes.

Five: Add the coconut milk and bring to the boil.

Six: Reduce heat and simmer allowing the liquids to reduce considerably, about 30 minutes.

Rendang is full of spice flavour, but it isn't necessarily spicy hot. This particular recipe uses one red chilli , which can add a good level of heat to the dish. You can adjust the amount to your own taste.

If the dish is still too spicy once you have cooked it, you can cool it down by adding a teaspoon of palm sugar (or brown sugar) or by stirring through a tablespoon of plain yogurt.

We just used some onion for this recipe. You can of course, add any vegetables that you wish. Baby corn, mushrooms, carrot, aubergine (eggplant), pak choi (bok choy), broccoli, bean sprouts and green beans can all be used and are popular in Indonesian cuisine.

We served this with some simple basmati rice, but why not try our Turmeric Rice? The dish is quite a filling meal on it's own, but you could serve some sides too. Try our Carrot and Coriander Side Salad, Cucumber and Tomato Salad or just some flatbreads to mop up any sauce.

Store: This is the perfect make ahead meal as the flavour intensifies overnight and tastes even better when reheated. Keep in airtight containers in the fridge for up to 3 days.

Freeze: To freeze, portion out into airtight containers and put in the freezer for up to 3 months.

Defrost: Defrost in the fridge overnight.

Reheat: Reheat in the microwave or in a pan on the hob.

Can I swap chicken for beef?

Beef is more commonly used in a rendang, so it would definitely work well. We would recommend cooking it very low and slow for about an hour, so the beef falls apart.

How many calories are in a chicken rendang?

There are 390 calories in this portion of chicken rendang. Serving it with rice or bread would increase the calories.

Can I cook chicken rendang in the slow cooker?

Can I use chicken thighs for a chicken rendang?

Yes, you could swap the chicken breasts for chicken thighs in this rendang. We used breasts to keep it nice and lean, but using skinless and boneless chicken thighs would make it much juicer.

• This isn't a curry, so the sauce should be reduced as much as possible when cooking.
• If this is too spicy, add some palm sugar or a tablespoon of plain yogurt.
• Add any vegetables you like. 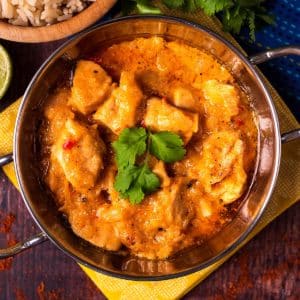 Rendang is an Indonesian dish and said to be one of the tastiest dishes in the world. This Chicken Rendang is simple and delicious.