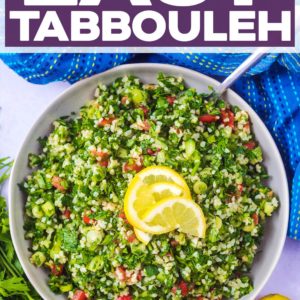 Tabbouleh is a delicious blend of bulgar wheat, parsley, lemon, tomatoes and an olive oil heavy dressing. A finely chopped salad, its a zesty and light side dish that goes perfectly with chicken skewers or fish and it's an easy side dish for a BBQ.

If you have ever been in a Lebanese/Mediterranean restaurant, then you will have seen tabbouleh on the menu and hopefully you have ordered it as it is incredible. But, it's really easy to make yourself with just a few ingredients and it is vegan too. The fresh parsley and mint really are the star of this dish.

Tabbouleh is a vegetarian salad originating from The Levant, made mostly of finely chopped parsley, with bulgur, mint, spring onion, tomatoes and seasoned with olive oil, lemon juice, salt and pepper. Some variations add garlic or lettuce.

One: Cook the bulgar wheat according to the packet instructions. This will take around 20 minutes.

Two: Put all the other ingredients into a bowl and mix well.

Parsley makes up the large part of any tabbouleh recipe, so it is important to get this bit right. We have used flat leaf parsley in this dish.

You will also need A LOT more than you think. Once chopped, the volume of parsley reduces greatly, so aim for about 60-80g (about 3 cups) per person.

As for cutting the parsley, it needs do be done in a slicing motion, rather than chopping. The chopping motion of a knife can somewhat squash the parsley, making it mushy. The same can be said for using a mezzaluna, so avoid those too. Use the sharpest knife you have and slice the parsley as finely as possible.

What else to add

As said above, onions and tomatoes make up some of this dish, but you can add more if you wish. Chopped cucumber, bell pepper, courgette (zucchini), olives, broccoli and mangetout (snow peas), all go well, but are far from traditional.

Chickpeas make a good addition, giving a nice creamy texture. The addition of nuts and/or seeds, such as sunflower seeds or flaked almonds will add a nice texture to the dish.

You can even add fruit if you wish, such as sultanas, dried cranberries or pomegranate jewels. You can even add some finely diced apple or pear. Feta is always a good addition on top of this salad.

Tabbouleh is typically a side dish, served chilled or at room temperature. It is a perfect accompaniment to other Middle Eastern foods, or as part of a meze set up. Some items that you could serve with tabbouleh are:

Yes, this is a super healthy salad. It's low in calories and parley is an anti-inflammatory, which can help to boost your immune system. The bulgar wheat is a good source of fibre too.

Do I have to use bulgar wheat?

Although traditionally it is made with bulgur wheat, you could use couscous, rice or pearl barley or any other grain instead if you don't have bulgur wheat on hand. Why not try quinoa tabbouleh?
The bulgar wheat isn't the main ingredient in this like other grain salads, the parsley is the star here. The bulgar wheat should just add some extra texture and make it a little more filling. It also soaks up all that delicious olive oil and lemon juice dressing too.

Can you make tabbouleh ahead of time?

Yes, you can make it ahead of time and it's actually our preference. We like to make it 2-3 hours before we are going to serve it and store it in an air tight container in the fridge as it really allows all the flavours to come together.

How to store tabbouleh

You can keep tabbouleh in the fridge in an airtight container for no more than 2 days. Before refrigerating, it is important to try and drain some of the juice first, to prevent it going soggy.

• Cut the parsley in a slicing motion, rather than chopping.
• When refrigerating, drain as much liquid as possible.
• For extra protein, add some chickpeas.
• For a gluten free option you could make a quinoa tabbouleh instead of using bulgar wheat.
• Use really ripe and fresh tomatoes in this dish, as you will really taste the difference.
• For best results, put the tabbouleh in the fridge for at least 30 minutes to allow the flavours to come together. 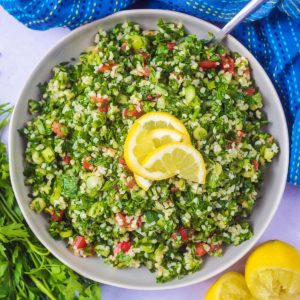 Tabbouleh is a vibrant Middle Eastern dish that can be eaten with just about anything. It should be a staple at any BBQ or picnic too.