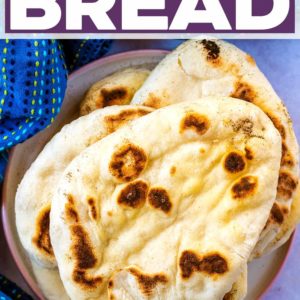 This is the easiest naan bread recipe, and it is ready in under 15 minutes and you only need 4 ingredients to make it. Perfect dipped in to a homemade curry or to use as an easy pizza base. This Easy Naan Bread is yeast free, but still soft, fluffy and pillowy.

Homemade bread doesn't have to be complicated and this Easy Naan Bread recipe is the simplest. Because it is yeast free, there is no need to leave it to rise and it's as simple as mixing the ingredients together, rolling it out and dry frying. Perfect if you are totally new to bread making.

Of course it is easy to buy it in a shop, but making your own is far easier than you might think. Plus, there are minimal ingredients, less packaging to throw away, cheaper and you can make just the amount that you need. You probably already have the ingredients to make it in your kitchen now.

How to make naan bread - Step by step

One: Put all the ingredients in to a large mixing bowl.

Two: Using your hands mix well to form a ball of dough.

Three: Put on a floured surface and knead for 2 minutes.

Four: Cut the dough into eight equal pieces and roll out until about 0.5cm/0.25 inch thick. If possible, pull into the traditional "teardrop" shape.

Five: Heat a dry frying pan over a high heat. Cook each naan bread until charred spots appear and the naan start to puff up - about 2 minutes each side.

What is naan bread?

Naan bread is a soft and fluffy teardrop shaped bread that is popular in East Asian countries. Traditionally it is made with flour, yeast, water and salt and served alongside curry and stew or just on their own.

Whilst ours isn't totally traditional, as it doesn't use yeast, it is still delicious. We left out the yeast, so that these could be ready in under 15 minutes. We also cook ours in a very hot frying pan to make them even quicker, whereas traditionally it would be done in a very hot clay Tandoor oven.

The great thing about this easy naan bread recipe is that you can add different flavours, so you never have to have it the same way twice. Use this as the base recipe, and then get creative. Here are some of our favourite ways to flavour it:

These easy naan breads are so versatile, they go with almost anything. Here are our favourite ways to use them.

Curry - Our favourite way to use them is to serve them alongside a curry. We love dipping it in to the sauce and making sure that none of it goes to waste. Some of our favourite curries are Salmon Curry, Slow Cooker Chicken Curry, Easy Lentil Curry or Slow Cooker Beef Curry.

Dip - We think these are perfect for dipping and they make a nice change from crisps. Why not try our Roasted Carrot Hummus, Restaurant Style Salsa or Tzatziki?

Soup - There is so much more that you can dip in to soup than just a slice of bread, and these fluffy naans are perfect for dipping. Why not try our Kale Soup, Potato and Leek Soup, Creamy Vegetable Soup or Carrot and Coriander Soup.

Pizza - Did you know that naan breads make a delicious pizza bread? Why not try our Naan Bread Pizza?

Can I make naan bread in advance?

Yes, you can make up the dough in advance. Once it is mixed together, wrap it up and then it will keep in the fridge for 2 days. You can then just roll it and cook as normal.

How to store easy naan breads.

These are always best eaten fresh, however if you have leftovers then you can store them in an air tight container for the next day. Reheat them in a frying pan or toaster. They will be a little bit crispier than they would have been the first time, but still just as good.

Can you freeze naan bread?

Yes, these freeze really well. Wrap them up individually and then put them in a freezer bag and they will keep for 2 months. Let them defrost at room temperature and then reheat them as above.

Why is my dough so sticky?

You want the dough to still be a little sticky, but it should still be workable and easy to hold. If it is really sticky, then add a little more flour. The same way, if it is too dry, then you need to add a little more yogurt. It depends on what brand of yogurt you are using, as some are much runnier than others.

How can I make gluten free naan bread?

How can I make vegan naan bread?

To make these vegan, simply swap the yogurt for a dairy free one.

• Don't worry about spending ages kneading this bread. You just need to bring all the mixture together and then knead a couple of times and it will be good to roll out.
• You need to make sure that the pan is very hot when the bread goes in it. This is so the bread cooks quickly and puffs up.
• If you don't have a rolling pin, then you can use a wine bottle to roll out these easy naan breads. 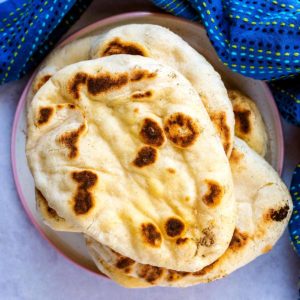 This is the easiest naan bread recipe, and it is ready in just 15 minutes and you only need 4 ingredients to make it.