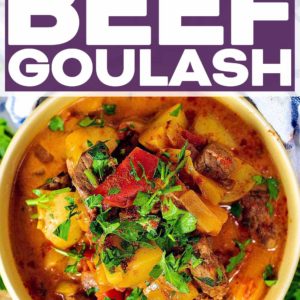 Hearty and warming stews are a must when the weather turns cooler and this Slow Cooker Beef Goulash is delicious comfort food with minimal effort. Tender chunks of beef cooked in a rich and smoky tomato sauce makes a nice change from the usual slow cooker dishes and it freezes well for a batch cook meal.

Fall apart, melt in your mouth chunks of beef are what makes this recipe really special. Cooked low and slow, the beef is cooked to perfection. But what takes this slow cooker beef goulash recipe to the next level is the sauce. It might have minimal ingredients, but it has maximum flavour thanks to the smoked paprika.

One: Season the beef with salt and pepper and had to a heated oil in a pan. Cook for 1-2 minutes until sealed on all sides. Once browned, put in the slow cooker.

Two: Add the onions, potatoes, carrots and peppers to the slow cooker.

Five: Stir well to mix everything together. Cook on high for 5 hours.

Goulash is traditionally a soup or stew that is made with meat and vegetables and seasoned with paprika and other spices and dates back to the 9th century. It originated in Hungary, where shepherds used to dry out meat before they left home, to be able to store it and then adding water to make a soup or stew. Over time, different spices and vegetables were added and turned goulash in to what it is known as today.

There are many different versions across Eastern Europe, and even the world, with different vegetables and spices being added. But paprika is always a common theme and is what gives goulash its classic flavour. If you are a big fan of paprika, then you might like our Spanish Bean Stew, Paprika Chicken Skewers and Mexican Beef and Potato Bake.

We wanted to keep it as traditional as possible, however we do have a few ways that you could adapt it. You could swap the beef for pork or even chicken to make it leaner.

You can use any colour bell peppers you like, and other vegetables that would work in it (although far from traditional) are mushrooms and courgettes. If you wanted to give a kick of spice to this, then stir in some red chilli flakes with the rest of the ingredients before cooking.

Because this has got potatoes in it, it is already a filling and hearty meal. However, you could always leave out the potatoes and serve it on rice or mashed potato, or even on a baked potato for something a little different.

All that delicious rich sauce can't be wasted, so serve this up with a big chunk of crusty bread to soak up all the smoky sauce.

What is the best beef to use in beef goulash?

The great thing about cooking a beef in a slow cooker is that you don't have to use expensive cuts of beef. You can go for the cheaper cuts like braising steak (also known as chuck steak), because cooking it low and slow makes it really tender. We wouldn't recommend using anything too lean, as it tends to dry out.

What slow cooker to use

There really is no rule here, just make sure that the beef joint you are using can fit in your slow cooker. We use a Crock Pot DuraCeramic Slow Cooker and we love it. What I love most about it is that you can put the bowl insert on the hob too. So, we thicken the gravy on the hob, in the slow cooker bowl. You can also sear the meat in it first. I also love that it has a clear lid, as I am so impatient that I want to keep looking and seeing what it is doing. If you don't have a clear lid, then lifting it to see will release lots of the heat and add to the cooking time.

Do you have to brown the beef first?

You don't have to, but we really recommend it as it adds such a depth of flavour. Basically, you want to trigger the Maillard reaction. It is a chemical reaction between amino acids and reducing sugars that gives browned food its distinctive flavour. You don't have to though, and you can just throw everything in to the slow cooker and leave it if you are really short on time.

Can you prepare beef goulash in advance?

Yes, you can do some of the prep in advance. You can sear the meat and add it to the slow cooker with the rest of the ingredients and then allow it to cool fully and then put it in the fridge (in your slow cooker pot) for up to 24 hours. You can then put it on the next day, but it might take longer to cook as it will be cold straight from the fridge.

Can you make goulash on the hob?

Yes, you can easily make this on the hob instead of in the slow cooker. Follow step one in a large heavy pan and then add the rest of the ingredients to the pan rather than the slow cooker. Put a lid on and cook on low for an hour, until the beef it cooked.

Leftovers of this will keep in the fridge for up to 2 days. Make sure it has cooled completely and then put in to an air tight container in the fridge.

Can you freeze beef goulash?

You can also freeze it for up to 3 months. Store the stroganoff without any sides though for best results.

How to reheat beef goulash

To reheat, you can either microwave for a couple of minutes or heat through on the stove. Make sure it is pipping hot before serving.

This can easily be gluten free. Just make sure to use gluten free flour (or cornflour) to thicken it, and that the stock you use is gluten free and that there is no cross contamination and you are good to go. Traditional goulash that is cooked on the hob doesn't have flour, but when cooked in the slow cooker it can get watery, which is why we add flour to thicken it up.

Can this recipe be doubled?

Yes, you can easily double the recipe and it won't change the cooking time. Just make sure you have a frying pan big enough to brown double the beef and a slow cooker big enough for double all of the ingredients.

Why is my sauce so thin?

Cooking dishes in the slow cooker can result in a watery sauce. If it is too thin for your liking, then you can remove the lid from the slow cooker and cook for a further 30 minutes with the lid off.

If you’ve tried this beef goulash recipe, or any other recipe on the blog, then let us know how you got on in the comments below, we love hearing from you!
Tag us in your creations on Instagram @hungryhealthyhappy - we love sharing photos when people make our recipes. You can use the hashtag #hungryhealthyhappy too.