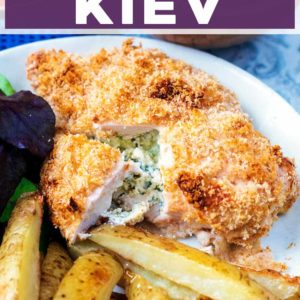 A cheesy, garlicky and herby filling stuffed in to a chicken breast and breaded, and then baked to crispy perfection. If you grew up eating this classic chicken dinner, why not try making it yourself. Simple, but impressive enough for a dinner party, this Chicken Kiev can be adapted to include different fillings too.

One: Mix together the cream cheese, Greek yogurt, garlic and parsley.

Two: Take the chicken breast and at one of the sides in the middle, cut a 2-3 inch long hole and create a pocket in the middle of the chicken. Fill this chicken with as much of the cream cheese mix as you can fit in.

Three: Whisk the egg and pour into a bowl. Put the bread into a food processor and turn it into breadcrumbs. Put these on another plate. Put the flour in a bowl.

Four: Gently, pick up the chicken breasts and dip them in the flour and then the egg.

Five: Then dip them in the bread crumbs and make sure they are covered.

Where does it originate from?

A chicken Kiev is a stuffed pounded chicken breast that is then coated in breadcrumbs and baked or fried. It is a traditional Ukrainian/Russian dish (although thought to have been invented in New York to please Russian customers) that became popular in the UK in the late 80s and early 90s and it's now making a comeback.

People want more from their chicken Kievs now though, which is why we have some great stuffing combinations for you.

What to stuff a Kiev with

This is the great thing about a chicken Kiev. It can be stuffed with anything! Usually you will get it filled with garlic butter, or maybe cream cheese (like in our recipe), but there is so much you can do with it.

You are limited with space, as it's only a small space to stuff, but you could finely chop some olives or sun-dried tomatoes to mix with the sauce for some extra texture. You could also shred a few spinach leaves to mix with the cream cheese for a bit of a green boost. If you want to make these more indulgent, then some chopped cooked bacon is a good addition.

Chicken breast is a lean protein option, and the main part of this dish - so it's a good start when it comes to healthy eating. We have baked ours, rather than frying them so that limits the oil being used.

It really comes down to the filling, so these can be as healthy or as unhealthy as you like. We skipped the butter and used a mix of half reduced fat cream cheese and Greek yogurt to keep it lower in fat. We also used lots of garlic and herbs, as they add plenty of flavour without adding a lot of calories. These Kievs are just 336 calories per portion.

Apparently they used to come with a health and safety warning in restaurants, as people were splattering themselves with hot butter when cutting in to them. So, best to leave the butter out and go with a creamy cheese filling instead.

What to serve with them

Chicken Kiev is a fairly heavy and filling dish, so you don't want to go overboard with the sides. If you just want a light meal, then a simple green salad would be enough. But for a bigger meal, we recommend some Garlic and Rosemary Roasted Potatoes with a Carrot and Coriander Salad and some Grilled Corn with Herb Butter. Or our Garlic Potato Wedges like we have in the photo.

Can chicken Kiev be cooked in a frying pan?

Yes, you can and if you want a really golden and crispy coating then frying is the way to go. But that will add extra calories from the oil. So, if you want to save some calories and still have a crispy Kiev, we suggest following our cooking instructions and baking them in the oven.

Can homemade chicken Kiev be frozen?

As long as the chicken hasn't previously been frozen, it's fine to freeze these Kievs. I would freeze them before they have been cooked though. So, stuff them and roll them in breadcrumbs and then put them on a baking tray and in the freezer. Then defrost it fully and cook in the oven following the instructions.

If you’ve tried this easy Chicken Kiev recipe, or any other recipe on the blog, then let us know how you got on in the comments below, we love hearing from you!
Tag us in your creations on Instagram @hungryhealthyhappy - we love sharing photos when people make our recipes. You can use the hashtag #hungryhealthyhappy too. 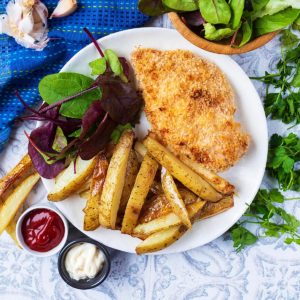 Big bits of chicken, covered in breadcrumbs, that ooze out garlic butter or melted cheese when you cut them open. That's a Chicken Kiev!