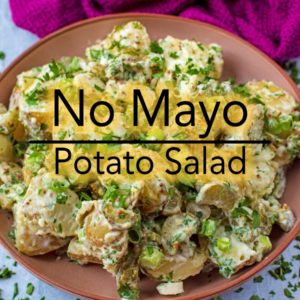 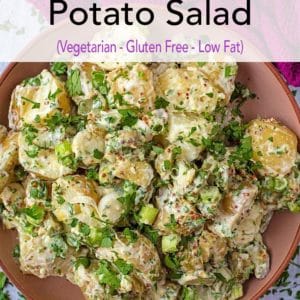 Our lighter No Mayo Potato Salad uses Greek yogurt instead of mayonnaise, and is less than 150 calories per portion (compared to the average portion of potato salad that has over 400 calories in it). If you want all of the flavour and creaminess from a potato salad, but less of the calories and fat, then give this healthy potato salad a try at your next BBQ!

Potato salad is a must at every BBQ, but along with all the other side dishes, burgers and skewers it can all feel a bit heavy. Mayo gives potato salad lots of creaminess, but you can replicate that by using Greek yogurt, and saving lots of calories and making this healthy potato salad lower in fat.

If you are looking for some other ways that we have used yogurt to lighten a meal up, then why not take a look at our Broccoli Slaw, Tuna Pasta Salad or Mexican Pasta Salad?

One: Add the potatoes to a pan of boiling water and simmer until they are just tender, around 10 minutes.

Two: Drain and rinse them and put them in a large bowl.

Three: Add the yogurt to the potatoes and mix well.

Four: Put the gherkins and spring onions (scallions) on top of the potatoes.

Five: Then add the salt, pepper, garlic powder and mustard.

Potato salad isn't traditionally the healthiest side dish (over 400 calories per portion), but there are lots of ways you can make it healthier. As well as using Greek yogurt instead of mayo, we have added lots of fresh herbs to give plenty of flavour without all the extra calories.

I have served this potato salad without mayo at pretty much every BBQ we have had an no-one has even guessed that it had Greek yogurt in it. So, surprise everybody! There are so many other flavours going on in this healthy potato salad, and still all the creaminess, that nobody feels like they are missing out.

The spring onions (scallions) and gherkins (pickles) have a really strong flavour and the wholegrain mustard really brings the whole dish together - but it can easily be left out.

Potato salads are a healthier choice than pasta salads usually, as they are pretty much all vegetable. They are also a good source of potassium and fibre (keep the skins on). This potato salad without mayo is a great opportunity to sneak in some extra vegetables too. Throw some shredded spinach in, sweetcorn or chunks of bell pepper.

Greek yogurt is pretty much the main healthy swap in this recipe. However, if you don't like the tart flavour that yogurt gives, you could use a reduced fat creme fraiche or sour cream instead and still have a healthy potato salad.

Or, skip the creamy dressing and go the oil and vinegar route instead. Mix some olive oil, red wine vinegar, mustard and herbs together for a simple dressing.

If you want to add some protein to this healthy potato salad, then add some chopped boiled egg to it. The egg yolks add lots of creaminess too. Cooked chopped bacon is also a delicious addition.

This is the perfect BBQ side dish, so it goes with all the usual BBQ foods like burgers, sausages and anything on a skewer. Here are some of our favour BBQ recipes that will be delicious alongside this:

How long do you boil potatoes for a potato salad?

These will need to be boiled for about 10 minutes, until they are just tender. Don't overcook the potatoes, otherwise your healthy potato salad will be mushy.

Yes, as long as you make sure there is no cross contamination then this can be gluten free.

Can you make it in advance?

Yes, and we would recommend you do as it tastes better after it has time to rest and for the dressing to absorb in to the potatoes.

Where was potato salad invented?

Potato salad is believed to have originated in Germany. It is very popular in the US now, and thought to have come from recipes brought to the States by German and other European immigrants during the nineteenth century.

Why is my potato salad watery?

To prevent watery potato salad, make sure the potatoes are drained throughly before adding the dressing. Once drained, leave in the colander over the pan to steam dry.

• If you don't like gherkins, then take them out and use a splash of apple cider vinegar instead in this healthy potato salad.
• Add some extra vegetables like sweetcorn, shredded spinach or chopped up bell pepper for a nutritional boost.
• If you still want to use mayo, why not try using half mayo and half Greek yogurt instead - it will still save you some calories and fat.
• Use waxy potatoes rather than starchy ones, as they will hold their shape better. We use Jersey Royals or Cornish new potatoes.
• You could swap out the parsley and use chives, tarragon or dill instead.
• Swap the spring onions for some finely chopped shallots to mix it up a bit.
• Love spice? A tablespoon of chipotle paste goes a long way in this dish and gives it a Mexican twist.
• For a quicker version of this, thinly slice the potatoes before cooking. They will cook really quickly and it makes a nice change to chunks of potato.

If you’ve tried this or any other recipe on the blog then let us know how you got on in the comments below, we love hearing from you!
Tag us in your creations on Instagram @hungryhealthyhappy - we love sharing photos when people make our recipes. You can use the hashtag #hungryhealthyhappy too. 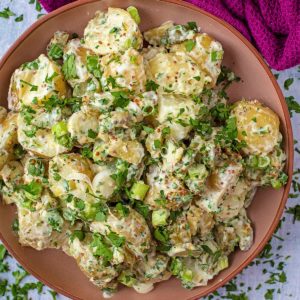 Our lighter No Mayo Potato Salad uses Greek yogurt instead of mayonnaise, and is less than 150 calories per portion.