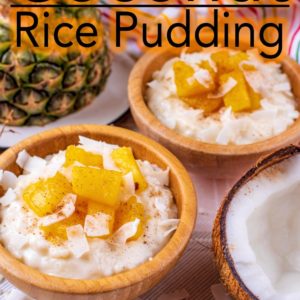 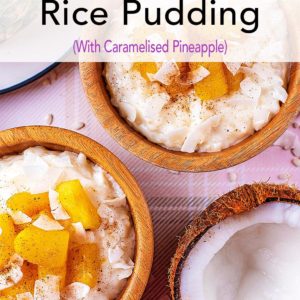 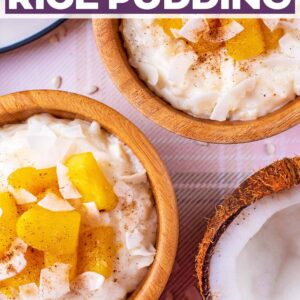 This super creamy Coconut Rice Pudding, that happens to be healthy and vegan too, is total comfort food with a tropical twist. Coconut milk not only makes this recipe rich and creamy, but adds that tropical taste to it, which is just enhanced with the sweet caramelised pineapple on top.

I am sure we all have happy childhood memories of rice pudding. It was always served up in the school canteen (topped with jam) and we would also open a can of it on a weekend as an after Sunday dinner treat.

We have taken a childhood classic and given it a quick and easy tropical twist with coconut and pineapple.

While we're talking about rice pudding, we have a more traditional rice pudding recipe if you prefer.

How to make coconut rice pudding - Step by step

One: Put the rice into a pan.

Three: Put on a medium heat and bring to the boil. Reduce the heat to a simmer and gently cook for 35-40 minutes, stirring occasionally, until it is thick and creamy and the rice is tender.

Four: While the rice is cooking, chop the pineapple in to 1 inch/2cm chunks.

Five: Put the pineapple and sugar into a frying pan.

Seven: Spoon the cooked rice pudding into bowls and top with cooked pineapple, coconut flakes and a dusting of nutmeg.

As the main flavour of the rice pudding is coconut, we wanted to stick with the tropical flavours and went with pineapple and some extra coconut. But you could really use anything.

Not a fan of pineapple? Swap it for mango and cook it in the same way. You could even caramelise some bananas to go on top.

Keep it simple and go with some homemade jam or chocolate chips, or it is good plain too. We have also topped with with peanut butter, berries, chopped nuts and pomegranate.

Can you freeze coconut rice pudding?

It will keep for about 2 days in the fridge (make sure it has cooled completely before putting it in the fridge). You can also freeze it in individual portions and then reheat in the microwave or on the hob after totally defrosting. It won't taste as good after it has been frozen though, but add a little water to loosen it up and make it super creamy again.

Can coconut rice pudding be cooked in a slow cooker?

Portion control is key with any dessert, and one portion of this coconut rice pudding is under 250 calories. The great thing with making it yourself, is that you can control the amount of sugar that goes in to it.

• You can swap the coconut and almond milk for any kind of milk, but it won't be as creamy.
• Swap the pineapple for mango (or a combination of both). Cook it in the same way, to mix things up a bit.
• You can cook this in the slow cooker on high for 2-2.5 hours, but you might need to add a little bit more milk towards the end if it is too thick.
• You can freeze this in individual portions or keep it in the fridge for up to 2 days. Just make sure it has cooled completely before putting it in the fridge or freezer. 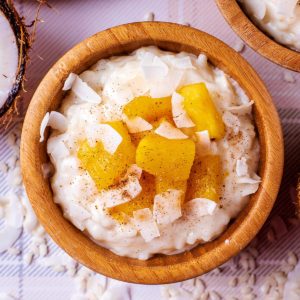 This super creamy Coconut Rice Pudding, that happens to be vegan too, is total comfort food with a tropical twist.