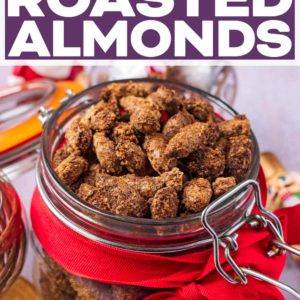 These Cinnamon Roasted Almonds are made using just 6 ingredients and they make the perfect festive season snack. Crunchy almonds coated in a cinnamon sugar are great for batch cooking and keeping in a jar for months. They also make really easy homemade Christmas presents.

Be warned - this snack is seriously addictive! I love snacking on almonds anyway, but add a cinnamon sugar to them and the moreish levels just increase. So, I like to make a batch, save some for me and then put the rest of them in pretty jars with ribbon to give out as Christmas gifts. Who doesn't love edible presents?

These are so simple, and very little hands-on time, which is why I love making them at Christmas when everyone is hungry, but I have enough to be getting on with in the kitchen. Easy to adapt with other festive flavours and even different nuts, these are much cheaper than flavoured nuts that you can buy in the store.

If you are looking for other ways to use almonds, then why not check out our Vanilla and Honey Almond Butter, Almond Butter Cookies or Homemade Almond Milk?

Two: In a small bowl, whisk together the egg white, water and vanilla extract.

Three: Put the almonds into a mixing bowl and pour in the egg mixture. Mix until all the almonds are coated.

Four: Pour in the sugar/cinnamon mixture and mix well to coat the almonds.

Five: Spread the almonds in a single layer over a lined baking tray. Put in the oven for 1 hour, stirring twice.

Whilst this is not the healthiest snack in the world due to all of the sugar, there are lots of health benefits from the almonds. Although almonds are often referred to as a nut, they are actually a seeds and they are the fruit of the almond tree. You can buy them blanched, which is when hot water has been put on them to remove the brown outer coating, leaving behind a smooth white interior, but we have used skin on almonds because not only are they cheaper to buy, but we like the dark colour.

Almonds are a great source of protein, fibre, zinc, calcium, magnesium, vitamin E, selenium, and B vitamins. Although they are high in fat, it is mostly monounsaturated fat, which helps to protect the heart by maintaining levels of HDL cholesterol (good) versus LDL cholesterol (bad).

There is not much that you can change with this recipe, as it is pretty perfect as it is. But, we have a few little changes that could be made.

Seasoning - It's all about the cinnamon and vanilla for us, but if you are not a huge fan of cinnamon, then you could swap it for nutmeg or ginger, or use a mixture of all of them for a really festive burst.

Nuts - We used almonds, but this cinnamon sugar coating works really well for pecans too. Maybe do a mixture of the two in one big pan. Cooking times may vary if you use another nut though, so check on them when stirring.

What to serve with Cinnamon Roasted Almonds

Although you could sprinkle these on top of a salad, we love them as a snack. Give us a hot drink and a jar of these and we are happy. Why not try one of these hot drinks perfect for the festive season:

They are also really good on top of overnight oats or porridge. Basically, anything you would put almonds on, you can add these. We love them on ice cream too.

How to store cinnamon roasted almonds.

This recipe makes a lot of almonds, so chances are you are going to have a lot leftover. That's no problem, because they store really well. You can put them in an air tight container or sterilised jar for 4 weeks.

Can I freeze cinnamon roasted almonds?

Yes, these actually freeze really well. Once they have fully cooled, transfer to an air tight container and they will keep in the freezer for up to 3 months. They thaw really quickly, but we actually quite like eating them frozen. Seriously, try it!

How can I wrap these to give as gifts?

There are a few options when it comes to wrapping these. You could sterilise some jars and them wrap them in ribbon. Or, you could put them in cellophane bags and add ribbon, which would be much cheaper and make a super budget friendly gift.

Why are my roasted almonds soft?

If they are soft, it is most likely that you didn't cook them long enough. I know an hour is a long time, but that's why the temperature is so low. These are meant to be quite dark, but they won't burn. If you have cooked them for the full hour, but they are still soft, then your oven might not be at the correct temperature. Every oven cooks things differently, and some run hot or cold. An oven thermometer is the best way to ensure that your oven is the correct temperature.

Yes, if you make sure that there is no cross contamination and the ingredients are gluten free certified, then this is a delicious gluten free snack.

Do I have to stir the almonds?

Yes, you need to make sure you stir these twice so they everything cooks evenly and nothing burns.

• Although it is tempting to eat these cinnamon roasted almonds right away, they need to cool on the baking tray for a while. They will be very hot inside.
• Make sure to cook for the whole hour, so the almonds are nice and crispy, rather than soggy.
• You can adjust the cinnamon levels depending on how much you like it.
• Why not try using pecans instead of almonds - cooking times may vary. 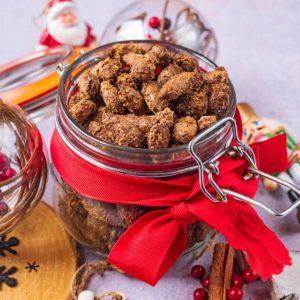 These Cinnamon Roasted Almonds are made using just 6 ingredients and they make the perfect festive season snack.