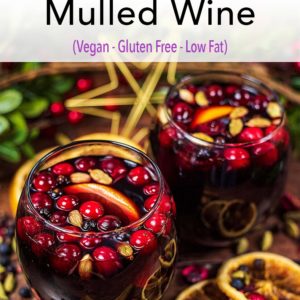 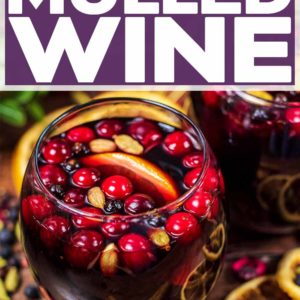 Traditional homemade mulled wine is a must make at Christmas time and this slow cooker version is so easy and great for serving to a crowd. Slow cooker mulled wine is the perfect dump and leave festive drink that will have your whole house smelling amazing. Zesty orange and cinnamon laced red wine with a gin kick.

Slow cooker mulled wine is so warming and cosy, it is like a festive hug in a mug. All of the best festive flavours like cinnamon, cloves, orange, cloves and star anise, cooked low and slow in a mixture of red wine, orange flavoured gin and maple syrup.

If you have guests over this Christmas, then a big batch of this is a must to greet them in from the cold. What a way to start off a Christmas party.

Looking for some other festive drinks to try? Why not try our Mulled Cider, Slow Cooker Hot Chocolate, Cinnamon Coffee and Chai Tea Latte?

Also, have a look at our collection of 25 of the best Christmas Drinks.

One: Put everything in to the slow cooker and cook on low for 2 hours.

What is mulled wine?

If you have never tasted, or even hear of, mulled wine before then you have been missing out. This winter cocktail is a must during the festive season, whilst cuddled up on the sofa watching a Christmas film.

It is such a simple drink to make, but with a lot of flavour. A bottle of wine, mixed with another alcohol of your choice (think brandy or gin) and some festive spices.

It is said that mulled wine originated in the 2nd century and it was created by the Romans. They would heat wine to defend their bodies against the cold winter - sounds good to us. Throughout the next century, the Romans conquered much of Europe and their love for mulled wine spread across their empire and the regions they traded with. This is why there are so many different variations of mulled wine across Europe, all with different names.

What alcohol to use

Red wine is the star of this drink, however you have some other options. You could swap the red wine for white wine if that is all you have.

You then need to add some kind of spirit or liqueur. Brandy is the most traditional thing to add, however we like a glug of gin. You can get so many flavoured gin, so we went with orange gin for an extra festive twist.

You can also add some apple cider, and you would need a lot more of this than you would brandy or gin, as it isn't as strong.

If you wanted to make a non alcoholic version of this, then you can either use a non alcoholic red wine (you can get some really great ones in the supermarket) or use grape juice. You could also use a mixed of cranberry and apple juice instead. Have you tried our Non Alcoholic Mulled Apple Cider recipe?

If you don't have 2 hours to cook this on the slow cooker, then you can cook it on the hob (stove top) with all the same ingredients.

Simply add everything to a large pan and then heat the wine on a medium heat until just before it starts to simmer (you don't want to boil off the alcohol) and then turn down to a low heat and cook for a further 15 minutes. Then follow the same instructions for this slow cooker version by straining the liquid.

What to serve with slow cooker mulled wine

This is a must over the Christmas season, so here are some of our favourite Christmas recipes that you could serve it alongside:

Can slow cooker mulled wine be made with white wine?

Yes, you can make this with a dry white wine. We don't think it tastes as nice, as red wine is so warming and comforting. But if white wine is all you have, then that works too.

Can you make slow cooker mulled wine without sugar?

You could leave the maple syrup out, however we find it takes the bitterness away a little bit.

Does the alcohol cook off from mulled wine?

Some of the alcohol will cook off, however not all. How much alcohol you are left with will depend on a few variables. Such as: how much alcohol you start with, how long it is cooked for and at what temperature, and what kind of vessel it was cooked in. Cooking it in an open shallow pan will evaporate faster compared to a slow cooker with a lid.

You can store this in a bottle in the fridge for up to 3 days, so make a big batch of it for Christmas. Make sure that it has fully cooled before you put it in the fridge. The bottle needs to have a lid on it and be air tight. I would recommend removing the spices before storing, as they will intensify otherwise, but some people might like that.

You can drink it cold, however it is best enjoyed warm. You can either heat it through in the slow cooker, or on the hob.

What is the difference between mulled wine and gluhwein?

Nothing, they are the same thing. Glühwein is what they call it in Germany and you might have had it at a Christmas market. There will be regional variations in the recipe, but it is essentially the same thing. In Italy is it called brulé, in Nordic countries, it is called glögg (glog). In French it is called chaud and it is called bisschopswijn in Dutch.

Yes, if you use maple syrup rather than honey then this recipe is vegan. Just make sure that the red wine you are using is vegan too.

• A splash of cranberry juice also adds a nice burst of flavour.
• You could also add the fresh cranberries to the wine mixture to cook at the same time, rather than adding them just before serving.
• There might not look like a lot of spices in the slow cooker, but trust us on this. They all have such strong flavours, so you don't need to go overboard.
• Make sure you strain all the spices from the wine mixture, as nobody was soggy cloves in their drink.
• To keep the mulled wine warm, turn your slow cooker to the warming setting and it will keep warm for the evening.
• You could add some halved strawberries for a bit of a summer twist to this. 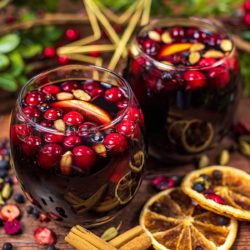 Traditional homemade mulled wine is a must make at Christmas time and this slow cooker version is so easy and great for serving to a crowd.