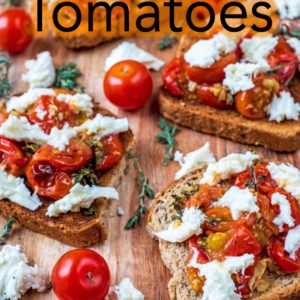 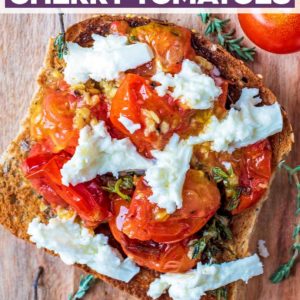 Ripe cherry tomatoes roasted in a little olive oil, garlic and black pepper with some thyme until they are bursting with flavour. You can serve these Roasted Cherry Tomatoes on bread with mozzarella, or use them as a pizza topping or stirred in to pasta. A great way to use up tomatoes with very little effort, but maximum flavour.

These roasted cherry tomatoes are little flavour bombs that are a great way to use up tomatoes that are going past their best, and not only are they versatile in their use, but you can flavour them so many different ways too. This recipe is so simple, but one of our favourites and most used.

With every bite of these roasted tomatoes you will get a burst of flavour - literally. Be careful when eating them straight from the oven, as the juices will be hot and burst in your mouth. But that's what makes them so great, because it's like they have their own sauce.

If you are looking for other things to serve on toast, why not try our Easy Pizza Toasts, Mexican Beans on Toast, Creamy Mushrooms on Toast or Smashed Avocado on Toast 5 Ways.

One: Put the tomatoes in a baking dish with the oil, garlic, salt, pepper and thyme and mix well.

Because of the tomatoes, this dish is bursting with goodness. Tomatoes, which are mainly a carbohydrate with some fibre, are packed full of vitamins, including beta-carotene (which becomes vitamin A when consumed), vitamins C and E, and some B vitamins and vitamin K. They also contain some calcium and magnesium.

Tomatoes are also a good source of potassium, which has been shown to be associated with lower risk of stroke and heart disease. Tomatoes also contain a compound called lycopene, which gives them their red colour, which research shows has the potential for reducing the risk of cardiovascular disease.

This is a very simple recipe, just the way we like it, so there is isn't much to change. You could add a splash of balsamic vinegar to the pan which adds a lovely flavour. Not only does the sweetness compliment the tomatoes really well, but the natural sugars help to caramelise the tomatoes a little.

You can use any tomatoes in this dish and chop them up, but we find cherry tomatoes the easiest as there is less chopping and they are lovely and sweet. You can also swap the thyme for rosemary.

If you wanted to make a cheesy version of these (and, who doesn't), then you could sprinkle over some grated parmesan when they come out of the oven.

How to serve roasted cherry tomatoes

There are SO many different ways to use these tomatoes, which is what makes them so versatile. We love them on toasted bread with some mozzarella for a light lunch. If you want to serve them on bread, why not try our Easy White Bread or Bagels.

But they are also amazing on pizza, mixed in to freshly cooked pasta or served alongside a grilled chicken breast or salmon fillet. I also love mixing some in to a green salad for a burst of flavour. We love them on top of avocado on toast, put on top of our Easy Tomato Soup, mix them in to our Grilled Little Gem Salad or serve them with Breakfast Egg Muffins.

Do I have to cut the tomatoes first?

How to store roasted cherry tomatoes

You can keep these in the fridge for about 4 days and then add them to various dishes. A great batch cook dish that will add a lot of flavour to your other meals, with very little extra effort.

Can you freeze roasted cherry tomatoes

If you have grown more tomatoes than you know what to do with, then this is a great way to use them up before they go bad. Batch cook them and then you can keep them in the freezer for a few months, so you have delicious tomatoes in the winter months. Just let them defrost and then heat them up in pasta sauces.

Yes, this dish is naturally vegan.

Yes, as long as you make sure there is no cross contamination, then these are gluten free.

Can I double the recipe?

Yes, these are great for batch cooking, so you can easily double the recipe without making any adjustments. Just make sure that you have a baking tray big enough for all the ingredients.

• Use the freshest and ripest tomatoes you can, as it will make such a difference to the flavour.
• To add some extra sweetness and for the tomatoes to caramelise a little, add a splash of balsamic vinegar to the pan before putting it in the oven.
• You can store these in the freezer, making this a great batch cook dish when you have a lot of tomatoes to use up.
• Use these tomatoes in pasta dishes, on pizza or mixed into salads.
• To give a richer flavour, you could roast the tomatoes in melted butter.
• Some fresh basil sprinkled on before serving adds a lovely freshness.

If you’ve tried these roasted cherry tomatoes, then let us know how you got on in the comments below.
Tag us in your creations on Instagram @hungryhealthyhappy - You can use the hashtag #hungryhealthyhappy too. 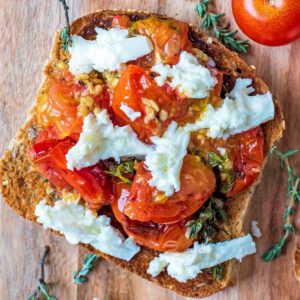 You can serve these Roasted Cherry Tomatoes on bread with mozzarella, or use them as a pizza topping or stirred in to pasta. A great way to use up tomatoes with very little effort, but maximum flavour.