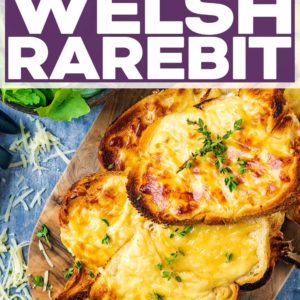 This traditional Welsh Rarebit (also know as Welsh Rabbit) is total easy comfort food and just what you need on a cold day. A thick slice of bread topped with a cheesy egg mix with a few special ingredients - you probably already have everything you need to make this. It's cheese on toast that has been seriously upgraded.

When you are in a rush at lunch time, but still want something a little bit special, then Welsh Rarebit is perfect. A thick slice of your favourite bread, loaded up with a cheesy topping and grilled the perfection. What's even better, is the kids love it so it's something the whole family can enjoy together.

Ready in just 10 minutes and just 6 ingredients, it is quick and easy comfort food at its finest. If you are looking for other ways to make toast more exciting, why not try our Pizza Toasts or Avocado on Toast 5 Ways?

One: In a bowl combine the cheese, egg, milk, mustard and Worcestershire sauce.

Two: Toast the bread on both sides. Divide the cheese mixture between the slices and spread over. Put under the grill until the cheese has melted and is browned.

What is Welsh Rarebit?

It is often likened to cheese on toast, but it is so much more than that! Instead of just layering some cheese on top of toast and popping it under the grill, the cheese is grated and mixed with egg and some mustard and Worcestershire sauce. The cheese mixture is really creamy and the mustard and Worcester sauce give it a real kick of flavour. Traditionally it would have some kind of ale or stout, but we left that out as we were making it for the kids, so we added milk instead.

Where does the name Welsh Rarebit come from?

It is said that it first appeared in Hannah Glasse’s book The Art of Cookery Made Plain and Easy in 1747 as Welsh ‘rabbit’. Glasse's recipe was just cheese on toast with mustard added, so it's a little different from the version we know now. However, a dish like this has been eaten amongst working class Welsh families since the 1500s.

Where does the ‘rabbit’ come from? It is rumoured that because this was a cheap dish to make, that people would say it was ‘as good as any rabbit.’ The term ‘rarebit‘ came along much later, and it was most likely used to stop anyone getting confused that cheese on toast actually contained rabbit, but it doesn't actually exist in the English dictionary.

This is quite the traditional recipe, so any variation would take away from that. As mentioned above, traditionally it would have a splash of ale or stout in it, which adds a lot of flavour. However, we were making it for young kids, so we replaced it for milk to still keep the same consistency in the cheese mixture.

Although this Welsh Rarebit really isn't missing meat, if you wanted to add some meat them some grilled and chopped bacon or cooked chorizo would make a delicious addition.

Looking to add some vegetables? Keep it traditionally Welsh and add some sautéed leeks. To give it a green vegetable boost with some chopped spinach mixed in to the cheese mixture. We also like to slice up some beef tomatoes and put them on top before it goes under the grill.

This is quite the indulgent recipe, so it really doesn't need anything with it. However, if you were serving this up as lunch for a few people, then we have some side dishes that would go perfectly with it:

We wouldn't recommend storing this after it is made, as it doesn't reheat well and it's not great eaten cold. It only takes 10 minutes to make though, so make it from fresh each time.

Is you use a gluten free alternative to Worcestershire sauce (or leave it out) and make sure the mustard and bread you are using is gluten free, then this can be adapted to be gluten free.

Can you make Welsh Rarebit in advance?

• If you like a little spice to your food, then add a pinch of smoked paprika or cayenne to the cheese mixture before putting it on the toast. A splash of hot sauce works too - we love Sriracha.
• Fresh herbs are optional, but they add a lovely fresh flavour to these. We like some chopped fresh chives on this.
• Add a green vegetable boost to these with some chopped spinach and grated courgette. Just make sure to squeeze any excess liquid out of the courgette, otherwise it will make the toast soggy.

If you’ve tried this Welsh rarebit recipe, or any other recipe on the blog, then let us know how you got on in the comments below, we love hearing from you!
Tag us in your creations on Instagram @hungryhealthyhappy - we love sharing photos when people make our recipes. You can use the hashtag #hungryhealthyhappy too. 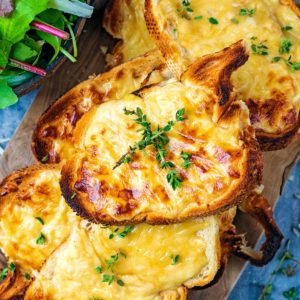 This traditional Welsh Rarebit is total easy comfort food and just what you need on a cold day. It's cheese on toast that has been seriously upgraded.