Tuna Stuffed Baked Potatoes are such a budget friendly and versatile meal. Easy to adapt with different vegetables, it's a comforting lunch that the whole family will love. Crispy baked potatoes stuffed with cheese, tuna, sweetcorn and sun dried tomatoes.

Whenever we are lacking lunch inspiration and don't fancy another sandwich, we always turn to a baked potato. Instead of just cutting them open, piling them with toppings and serving them up, we like to scoop out the potato, mix it with other ingredients, stuff it back in to the skin and cover it with cheese and put it under the grill. It's the best way to eat baked potatoes.

One: Pierce the potato skin several times. Put the potatoes in a preheated oven at 180°C/350°F/Gas 4 and baked for 60-90 minutes, until they are easily pierced with a fork. Slice the potatoes in half and scoop out the insides and put them in a bowl.

Two: Add the rest of the ingredients to the bowl with the potatoes and stir, but reserve half the cheese.

Three: Divide the mixture between the potato skins and top with the rest of the cheese.

Four: Put them back in the oven for 15 minutes until the cheese has melted.

Make sure the potatoes are washed and  scrubbed well  and any mud is removed from them. Pat them dry, otherwise they won't get nice and crispy in the oven.

Rub the potatoes in a little oil and then season them well, and then prick them with a fork.

The great thing about stuffed baked potatoes is that they are easy to adapt. Once you have the potatoes scooped out and some kind of cheese added, you are so many options. We used tuna, but you could swap that for leftover shredded chicken.

When it comes to vegetables, there are a lot of choices. We added sweetcorn and some sun dried tomatoes (which add so much flavour). However you could add chopped spinach, onions, cherry tomatoes, finely chopped mushrooms of shredded courgette.

What to serve these with

You could serve a few slices of homemade garlic bread on the side. Slice up a french stick and then spread it with a mix of butter and crushed garlic. You can then sprinkle it with a little cheese and some dried herbs before putting it in the oven for around 7 minutes. Double carbs is always a good option.

We love trying to get greens in to any meal, even if they are on the side. So a big green salad is a delicious addition to this. You could also serve it with our Roasted Garlic and Herb Mushrooms, or Spanish Olives.

What potatoes are best for stuffed baked potatoes?

The best potatoes to use for baking are Russets. Their skins tend to be thicker and the starchy insides have a nice sweet flavour and fluffy texture when baked. Russets are also usually fairly large, making them great for stuffing.

Can stuffed baked potatoes be frozen?

You can freeze the potatoes, but not the filling, as this is always best made fresh. To freeze the potatoes, leave them uncut and let them cool completely. Put them in the freezer uncovered until they're solid, which will take about one hour. Then wrap each one again in aluminium foil and place them in a freezer bag. Baked potatoes will keep in the freezer for up to a year, but will taste their best up to 3 months.

Can stuffed baked potatoes be made ahead of time?

Yes, you can definitely make these ahead of time. Make them up until you sprinkle the last bit of cheese on top and then you can put them in the fridge until you are ready to put them in the oven. We wouldn't recommend preparing them longer than 12 hours in advance though.

Can you make stuffed baked potatoes with chicken?

Yes, if you aren't a fan of tuna then these can easily be made with leftover shredded chicken. You could also use cooked prawns or salmon for something different. A little bit of cooked chopped bacon is good too.

• Make sure you pat the potatoes dry after washing them, as this will help to get the skin nice and crispy.
• Oil and season the potatoes well before they go in the oven.
• You don't want to cook them at too high a temperature, because the skin will get crispy too quickly, but the inside won't be cooked.
• You can swap the tuna for leftover shredded chicken.
• You can use any cheese, or a mixture of a few. Make sure it's a cheese that melts well.
• A little crumbled goats cheese on top of these adds a lot of flavour.
• You can freeze these potatoes before they are filled to make them quicker to make the next time. 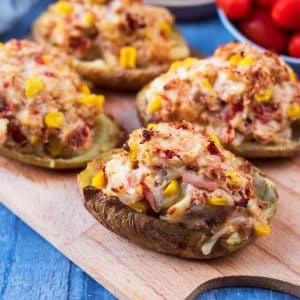 Tuna Stuffed Baked Potatoes, twice baked or double baked as they are sometimes known, are such a budget friendly and versatile meal.