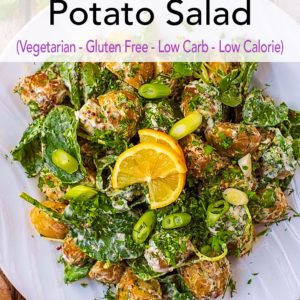 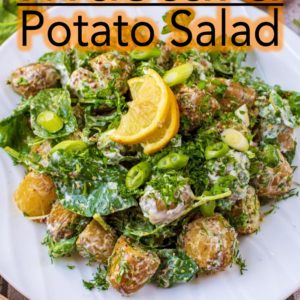 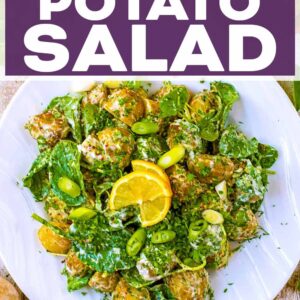 If you are looking for a light and fresh potato salad recipe with plenty of flavour to keep you going all through summer, then this Mustard Potato Salad is it! Deliciously crispy roasted potatoes mixed with a creamy but light mustard dressing with plenty of herbs. Lots of opportunity to add extra ingredients so this easy potato salad is different every time.

There are a lot of potato salad recipes out there and every house has their favourite, but this mustard potato salad really does have it all. We think that mustard is essential when it comes to a potato salad dressing as it adds lots of flavour without adding a lot of extra calories.

You can use wholegrain or dijon mustard but we find that wholegrain adds a nice extra texture to the dish and it looks great when served up on the table too. Mixed with some creme fraiche rather than mayo, lots of herbs and some greens it makes the perfect summer side dish.

How to make mustard potato salad - Step by step

Two: Drain the potatoes and mix with the oil. Put into a baking tin.

Three: Put into the oven and roast for 40 minutes.

Four: Finely chop the parsley and dill and thinly slice the spring onions.

Five: Put everything into a large bowl.

Potato salad isn't traditionally the healthiest side dish (over 400 calories per portion), but there are lots of ways you can make it healthier. As well as using creme fraiche instead of mayo, we have added lots of fresh herbs to give plenty of flavour without all the extra calories.

We used reduced fat creme fraiche to make the creamy potato salad dressing, but you could use sour cream, mayo or even a fat free Greek yogurt instead (this would reduce the calories by a fair bit). If you didn't want a creamy dressing, then you could stick with just the lemon juice and some olive oil too.

Whilst the mustard adds most of the flavour to this side dish, we didn't want to stop there. We packed it full of herbs with chopped up parsley and dill and then put a little sprinkle of sumac in when seasoning.

We went with a mixture of spinach, rocket and watercress for the greens, but you could just use one of those or even some kale. We sometimes roast up some vegetables like peppers, courgette and onions when roasting the potatoes and mix those in. Other vegetables that go well in this potato salad are green beans, asparagus and peas.

I am also a fan of adding things like chopped up gherkins, olives or capers to give it a little extra crunch and some saltiness too - if you do that then you don't really ned to add any salt when seasoning, just some pepper. Another delicious salty addition is a little bit of grilled chopped bacon. Bacon in a potato salad is a bit of a game changer if you are looking for something more indulgent.

What to serve with Mustard Potato Salad

A delicious creamy potato salad is the ultimate BBQ side dish, so it goes well with all the usually BBQ staples like burgers, sausages and chicken. Why not try one of our BBQ recipes:

Can mustard potato salad be made in advance?

You can make this potato salad in the morning to have at lunch or in the evening, but we wouldn't recommend making it any further in advance than that. The creamy dressing really needs to be as fresh as possible and the greens are best served within a few hours too. But leftovers will be fine for the next day.

How long do you have to boil potatoes for potato salad?

These potatoes are roasted rather than boiled. However, if you wanted to boil them, then these will need to be boiled for about 10 minutes, until they are just tender. Don't overcook the potatoes, otherwise your healthy potato salad will be mushy.

As long as you make sure the mustard you are using is gluten free and there is no cross contamination, then this can be gluten free.

Why is my potato salad soggy?

To prevent watery potato salad, make sure the potatoes are drained thoroughly before adding the dressing. Once drained, leave in the colander over the pan to steam dry. You won't have that problem if you are following this whole recipe and roasting the potatoes first.

All you have to do is swap the creme fraiche for a vegan alternative. You could also use a plant based yoghurt or mayo.

• This is a great fridge raid recipe, so feel free to add any extra vegetables you have that need using. Roasted peppers, courgettes and onions go well with this.
• You can use either wholegrain or dijon mustard for this.
• Save some calories by using fat free Greek yogurt instead of creme fraiche for the dressing.
• If you still want to use mayo, why not try using half mayo and half creme fraiche instead - it will still save you some calories and fat.
• For extra saltiness, try some chopped grilled bacon or chopped gherkins, olives or capers.
• Use waxy potatoes rather than starchy ones, as they will hold their shape better. We use Jersey Royals or Cornish new potatoes.
• For a quicker version of this, thinly slice the potatoes before cooking. They will cook really quickly and it makes a nice change to chunks of potato. 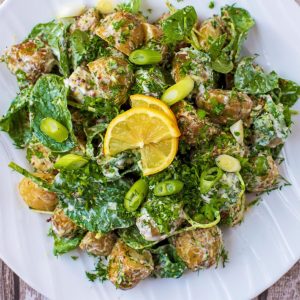 If you're looking for a light and fresh potato salad with plenty of flavour to keep you going all through summer, then this Mustard Potato Salad is it!