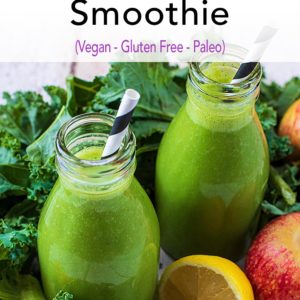 Start your day with a refreshing and vibrant energy boosting Kale Smoothie and you will be ready to take on whatever the day throws at you. This apple and kale smoothie is a great way to give your diet a veggie boost too. A simple vegan smoothie that is a mixture of kale and apple. It takes less than 5 minutes to make too!

We are a big fan of green smoothies here and when we feel like we need a little healthy pick me up, then we make ourselves a kale smoothie.

There are so many different ways to make an energy boosting green smoothie, but apple and kale is our favourite because of the iron boost and then the sweetness from the apple. It's a great way to make use of seasonally kale too.

Kale is called a superfood for good reason. Not only is it a great source of iron, but powerful antioxidants, vitamins A, C and K, as well as dietary fibre and calcium. That is why it makes it the best addition to your green smoothie.

One: Put the kale, banana and apple in to the blender.

Not everyone finds it easy to include more leafy greens in their diet, but green smoothies like this Kale and Apple Smoothie really help with that. We don't believe in detoxes or cleanses, but if you have had a heavy weekend and need a bit of a lift, we always turn to this.

With a high powered blender, the kale is blended up really smooth, so apart from the vibrant green colour you would never know it is there.

What takes the edge off the kale in this smoothie is the apple we have blended in to it and the maple syrup and banana which all add a little sweetness.

What makes it so good?

The key to getting a perfect kale smoothie is getting just the right balance between greens (which can be a little bitter) and the sweetness.

That's why we used a small apple and banana and just a little bit of maple syrup, as you don't want it to be too over powering either way.

A little bit of lemon freshens the whole thing up and the banana and almond milk make it nice and creamy, just the way a smoothie should be.

How to adapt it

There are lots of ways you can adapt this kale smoothie to suit your own tastes. If you want to make this a super cooling smoothie, then freeze the banana first. You could use spinach instead of kale, or a mixture of them both.

Don't have any maple syrup? You can use honey instead but the smoothie wouldn't be vegan then. You don't have to add any liquid sweetener, but we find it takes the edge off the kale.

You could even add some tropical fruits like pineapple or mango to change things up a bit or some nut butter to make it extra creamy. If you want a banana free version, swap it for half an avocado.

How to store it

Fresh is always best so you should try to drink the smoothie straight after making it. However, to save yourself some time in the morning you can make it the night before. Just store it in an air tight container in the fridge. Make sure to give it a quick stir before drinking.

Can you make smoothies in advance?

Green smoothies taste best when they are made fresh, however if you would like to do some of the prep in advance, you can put the fruit and kale in zip lock bags and then keep them in the freezer. Then, when you are ready to make the smoothie, just empty the bag in to the blender and add the milk and anything extra.

How to sweeten a kale smoothie?

We used maple syrup to sweeten the smoothie to keep it vegan, however you can use honey instead. The riper the fruit used, the sweeter it will be naturally. You don't have to use any added sweetener at all.

• Make sure you use a high powered blender, as the kale is quite tough. If you don't have a high powered blender, then blend the kale with the almond milk first and then add the rest of the ingredients and continue blending.
• You can use any milk you like in this recipe.
• If you want a banana free smoothie, swap it for half an avocado.
• Remove the ribs and stems of the kale before adding it to the blender.
• Give the smoothie a stir before serving, as it can get a bit mottled.
• You can save yourself some time and make it the night before and store in an air tight container.
• Make a super cool smoothie by freezing the banana before using it.
• You can swap the kale for spinach or use a mixture of the two.
• Adding a little bit of lemon really gives it a lift.
• If you wanted to make it even sweeter (not that we think it needs it), then you could add a little bit of orange juice to it.
• Make it even cooler by serving it over ice.
• If you need even more of a pick me up from your smoothie, add some grated ginger to it. Only a little though, as a little goes a long way. Start your day with a refreshing energy boosting smoothie and you will be ready to take on whatever the day throws at you. This apple and kale smoothie is a great way to give your diet a veggie boost too.