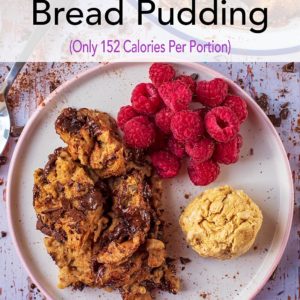 We took a classic bread pudding and put a lighter spin on it by sweetening it with just a little honey, using brown seeded bread and then we added some dark chocolate chunks. Because, why not! This Chocolate Bread Pudding is total comfort food but a little lighter.

Bread pudding is one of those classic school desserts that always brings back happy memories of eating it in the canteen full of hundreds of rowdy and sugar high kids. Nowadays, it is one of our favourite ways to reduce food waste as the bulk of the dish is bread. Got some bread that has gone a bit stale? It's screaming to be turned in to a chocolate bread pudding.

If you are looking for some more comforting desserts, then why not try our Creamy Rice Pudding, Mixed Berry Crisp, or Apple and Plum Crumble.

What is bread pudding?

Bread pudding is basically the combination of torn up leftover bread, milk, eggs and a sweetener. All soaked up together and then baked in the oven until gooey and crispy. Kind of like a sweet casserole. But there is so much more you can do with it and lots of ways to customise it.

What does it taste like? It's kind of got the gooeyness of brownies, but the flavour of French toast and it's pretty dense. Then it takes on the flavour of whatever else you have added in to it.

It's a classic British dessert and in the 13th century is was known as a poor man's pudding, because of the basic ingredients that it uses. Basic doesn't have to be boring and if you want comforting dessert that the whole family will love, then this is it.

How to make chocolate bread pudding -Step by step

Two: In a bowl, whisk together the milk, egg, honey, vanilla and cinnamon.

Three: Pour the milk mixture over the bread and make sure everything is covered. Put in the fridge for at least an hour.

Four: Take out of the fridge and sprinkle the chocolate chunks on top.

What bread to use

The great thing about this is you can use pretty much any bread - which is why it's so good for using up stale bread. We had some wholemeal seeded bread that needed using, so we tore that up to mix in. You can use regular white bread or you can even use croissants if you want to make it a little more indulgent.

We have made this chocolate bread pudding so many times over the year and I don't think we have made it the same way twice. Use this as a base recipe and then go crazy with the add-ons. You can mix in some chopped nuts (we like pecans) and dried fruit (cranberries or cherries go well with the chocolate).

If you want a flavoured bread pudding, then orange or mint go well with chocolate. You can use orange or mint extract or swap a little of the milk for some orange juice and then grate some fresh orange zest on top when you sprinkle the chocolate.

You can serve it as it is, but if you want to make it more of an indulgent dessert, then serve it with some ice cream or frozen yogurt. A little drizzle of caramel sauce is a good addition too. Or, why not add our Chocolate Sauce for an extra chocolate flavour?

Can chocolate bread pudding be made in advance?

Yes, and there is some preparation that goes in to this dish that would suit it being made in advance. Once you have added the liquid to the bread, it then needs to go in the fridge for at least an hour so that the bread can soak everything up. But, you could leave it in the fridge for 4-5 hours and then put it in the oven 40 minutes before you are ready to eat it.

Can you reheat bread pudding?

This will keep in the fridge for up to 3 days and then you can either eat it cold, at room temperature or heat it up in the oven. I do find that the texture changes when it reheats, so it's best eaten straight after cooking - you can always change the portion sizes if needed.

• Stale bread is best to use, so this is a great recipe to reduce food waste.
• You can add so many different things to this dessert. Nuts and dried fruit work well.
• Want a flavoured bread pudding? Swap the vanilla extract for an orange or mint extract.
• Add some extra creaminess by adding dots of cream cheese at the same time as the chocolate. It will all melt together to make these more indulgent.
• Leftovers will keep in the fridge for about 3 days.

If you’ve tried this chocolate bread pudding recipe, then let us know how you got on in the comments below.
Tag us in your creations on Instagram @hungryhealthyhappy - You can use the hashtag #hungryhealthyhappy too. 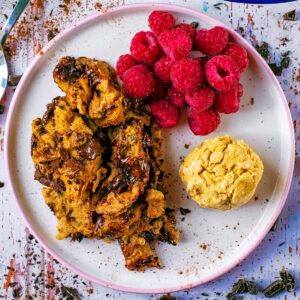 This is no traditional bread pudding recipe, but that's not a bad thing. This Chocolate Bread Pudding is a healthy alternative to the traditional dessert.