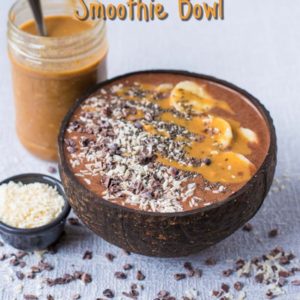 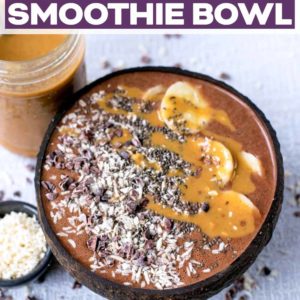 Whether you eat it for breakfast or dessert, this Chocolate Peanut Butter Smoothie Bowl will satisfy your chocolate craving, no matter what time of day it is. Loaded with creamy and protein-packed homemade peanut butter and banana for sweetness, this smoothie bowl can also be piled high with your favourite toppings. Filling and nutritious and ready in less than 5 minutes.

Why drink a smoothie out of a glass when you can pour it in to a bowl and then load it with toppings. Serving a smoothie in a bowl makes it feel like much more of a meal that drinking it out of a glass, and it can be more filling with toppings galore. If you love chocolate peanut butter cups, then you are going to LOVE this!

Chocolate and peanut butter is such a classic combination, but it is usually only combined in less nutrient dense things like brownies or ice cream. This smoothie is balanced and nutritious, providing that you can exercise some restraint around an open jar of peanut butter.

If you are looking for some other chocolate recipes to try, then why not try our Hot Chocolate Spoons, Avocado Chocolate Pudding, Chocolate Flapjacks, or Healthy Chocolate Mug Cake.

One: Put all of the smoothie ingredients into a blender.
Two: Blend until smooth.
Three: Pour into bowls and add toppings.

Shall we talk about toppings again? I told you that I was all about the toppings. This is where you can really get crazy! I threw some coconut on there, because it contrasts well with the chocolate and also it tastes delicious. Then there was some carob nibs for some crunch.

I added some chia seeds for a protein boost, then some leftover banana and then some more peanut butter, because you can never have too much and it looks amazing too.

We try to make our own peanut butter as much as possible, so we can control exactly goes in to it and that is just peanuts. Nope, nothing else!

You need a pretty powerful food processor to make it though, and I have broken a cheap food processor before trying to make nut butter. But, it's all worth it in the end. Take a look at our Homemade Peanut Butter recipe.

There are lots of other options when it comes to toppings though and here are some of our favourites:

How sweet is this chocolate smoothie bowl?

This isn't overly sweet, but the banana does add sweetness. If you like really sweet smoothies, then add a squeeze of honey or maple syrup if you want to keep it vegan.

How to store a chocolate smoothie bowl.

This smoothie bowl actually stores really well and we like to make it as a on the go breakfast. Store it in an air tight container and it will store in the fridge until the next day and you can take it to work with you.

Is this chocolate smoothie bowl vegan?

Yes, this is vegan, however you can use dairy milk if you prefer.

Yes, as long as you make sure there is no cross contamination then this is a gluten free chocolate smoothie bowl.

• If you want to make this smoothie bowl really thick and creamy, and also nice and cold, then you can freeze the bananas first. Slice them up and put them in a freezer bag and they will blend well when frozen like that.
• If you really wanted to reduce the sugar in this smoothie, then you could swap half the banana for cauliflower, which would still give the smoothie creaminess.
• A little bit of vanilla adds some extra flavour to this smoothie bowl too. Make sure it is extract though, and not essence.
• You can also add ice cubes to the blender to make the smoothie cold.
• Over ripe bananas are best as they will have the most flavour and sweetness.
• You can add dates for some extra natural sweetness. 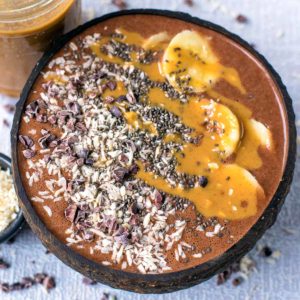 Whether you eat it for breakfast or dessert, this Chocolate Peanut Butter Smoothie Bowl will satisfy that chocolate craving, no matter what time of day it is.