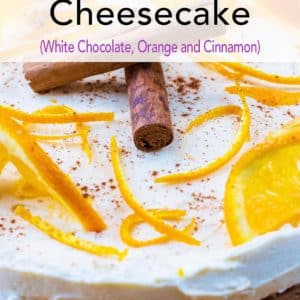 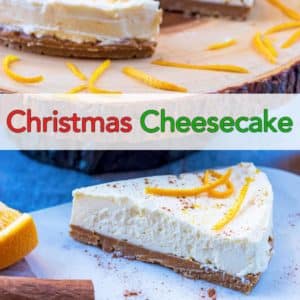 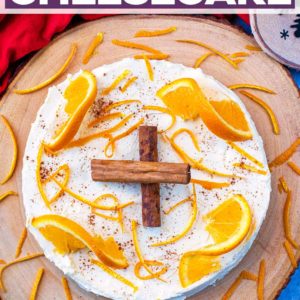 A cinnamon biscuit base, topped with a light cream cheese and white chocolate mix that is flavoured with orange juice and zest and a little vanilla. All of the flavours of Christmas in a really simple dessert. It looks really impressive, but it is super easy to make. Christmas is the time when we indulge in delicious desserts and this Christmas Cheesecake is perfect for that.

I put off making my own cheesecake for years, because I thought they were too complicated, but this no bake cheesecake recipe is so easy. It might look complicated, as there are a lot of different steps, but they are all quick and easy and will ensure you have the perfect Christmas dessert to wow your guests with, or just eat it all to yourself once they have gone home!

If you want to serve up something simple, but impressive, with all the flavours of Christmas, then this Christmas cheesecake it perfect.

Looking for some other festive treats? Why not try our Santa Hat Brownies, Cranberry Orange Muffins or Cinnamon Flapjacks?

How to make Christmas cheesecake - Step by step

Prep: Grease a 20cm springform tin with vegetable oil and then line the base with a circle of baking paper (a).
Put the biscuits in to a ziplock bag and using a wooden spoon, bash them until they are crumbs(b).

One: Melt the butter in a large sauce pan (a).
Add the crushed biscuits and cinnamon to the melted butter (b).
Stir well to combine (c).
Pour the biscuit mixture into the tin and gently press it down (d).
Chill in the fridge for 45 mins.

Two: Melt the white chocolate in the microwave, or in a bowl over a pan of hot water (a).
In a large mixing bowl, mix together the cream cheese, vanilla, orange juice and zest and honey (b).
Then gently mix in the melted white chocolate (c).

Three: In another bowl, whisk the double cream until it starts to thicken (a).
Gently fold into the cream cheese and chocolate mixture (b).

Four: Take the base out of the fridge and spoon the cream cheese mixture on top of it (a).
Using a palette knife, spread the mixture around until it is smooth (b).

Five: Put it in the fridge for at least 4 hours, but preferably overnight. Carefully remove it from the springform tin and use the palette knife to wiggle it from the base. Put it on a serving plate/board and then decorate it with orange slices, peel and cinnamon sticks (all optional).

Let's face it, your oven is going to be in overdrive over the festive season, so you don't want something else that needs to be cooked. That's why a no bake cheesecake is the perfect Christmas dessert. All you need is some space in the fridge - which I know that might still be asking a lot!

Once the Christmas cheesecake is made, which takes less than 10 minutes, you just pop it in the fridge overnight until it is nice and set and then you can decorate it. Because it has to set overnight, it's a great make ahead of time dessert - one less thing to do on the big day!

To me, white chocolate and cinnamon just scream Christmas, which is why they are perfect in a Christmas dessert. But we wanted there to be something light and fresh in there too, so went for orange. You could swap the cinnamon for ginger, or use a mix of the two.

What is great about this cheesecake, is that you can use it as a base and then adapt it to add your favourite flavours. You could mix some chopped berries into the cream cheese mix or even some mince pie filling.

Fancy a different base? Why not use Oreos or even gingernsnaps for a festive twist?

Here is where the festive fun really begins. Let your creative side run wild here, as there are so many things you can do to decorate this. We kept ours simple with some cinnamon and orange, as they are the main flavours, but feel free to add your own twist.

You could top it with some Christmas decorations, like a Santa and his sleigh, or even do a snowman scene and have the white cheesecake as a snowy base.

A drizzle of caramel sauce on top would add a nice complimentary flavour and look pretty too.

What to serve with Christmas cheesecake

I really don't think you need to serve this festive cheesecake with anything. It isn't sickly, but it's a pretty indulgent dessert. But saying that, some people would happily pour cream over this or serve it with ice cream.

You could add some berries on the side to lighten it up a little. Keep it festive and serve with some cranberries.

Looking for a nice warming drink to serve with this? Why not try our Chai Tea Latte, Cinnamon Coffee, Slow Cooker Mulled Wine or Slow Cooker Hot Chocolate?

How long does cheesecake keep for?

In our house, not very long at all. I am lucky if I can get a slice myself before it is eaten. But, if you ARE lucky enough to have any leftovers to be able to enjoy some on another day, then it will keep in the fridge for up to 5 days.
It's also best to keep it covered, so that it doesn't absorb the flavours and smells of the fridge and so that it doesn't dry out too. Nobody wants a dry, leftover-turkey-flavoured cheesecake! I would recommend slicing it up and putting into air tight containers.

Can cheesecake be frozen?

Yes, you can and it actually freezes and defrosts really well. Slice it up and put it in freezer containers, or wrap it in foil (making sure that you don't squash it) and then put it in the freezer. It will keep in there for a couple of months.
When you want to eat it, take it out of the freezer and thaw it in the fridge overnight. Note that these freezing instructions are for this specific cheesecake. Other cheesecake freezing suitability will depend on the exact ingredients and toppings used.

Why is my cheesecake base too hard?

The first time we made a cheesecake, we put the biscuits in a food processor for too long until they were very fine crumbs. Then, after they were mixed with butter and put in the tin, we pressed it all down really hard so it was very compact. Both these things meant that we have a really hard, firm base, rather than a crumbly cheesecake base.
You want not too fine, but not too big pieces of biscuit, which is why bashing it with a spoon is the way to go. You need to press the mixture down in the the tin, but not too compact.

Is this Christmas cheesecake gluten free?

If you swap the digestive biscuits for a gluten free version, then this can be a delicious gluten free dessert.

• Be careful not to pack the base down too hard, otherwise it will be very hard and dense. You want a nice crumbly base.
Leave the white chocolate to cool a little (but it should still be liquid) before adding it to the cream cheese.
• Why not make this cheesecake even more festive by decorating it with your favourite Christmas decorations?
• Use this cheesecake recipe as a base and then feel free to adapt it with your favourite flavours.
• If you don't have time to leave it to set overnight, it needs a minimum of 4 hours in the fridge.
• Use a palette knife to get a smooth finish on top of the cheesecake.
• It might be tempting to use light cream cheese, but not only will it not have the same flavour, but it will be too runny too. 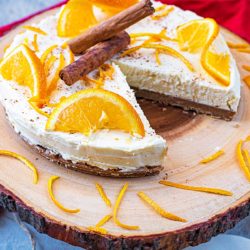 Christmas is the time when we indulge in deliciously indulgent desserts and this Christmas Cheesecake is perfect for that.