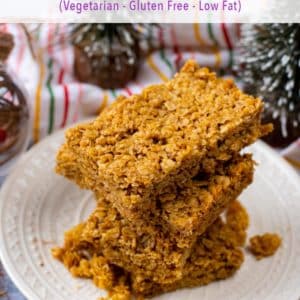 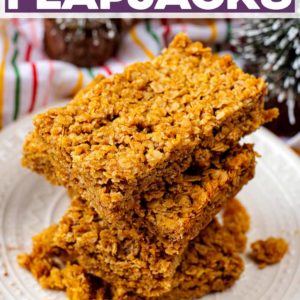 Just 6 ingredients, minimal prep time and so simple that they are a great recipe to make with kids. The festive season is all about baking for us, and these Cinnamon Flapjacks couldn't be easier. Buttery and sugary oats that are flavoured with cinnamon and ginger and baked until they are crispy on the outside and soft and chewy on the inside.

If you don't think of yourself as a very good baker, you can't go wrong with flapjacks. You just melt the butter, add the golden syrup and sugar and then stir in the oats before baking. The hardest part is waiting for them to cool, when you just want to eat them.

This is like those flapjacks you know and love from your childhood, but with a festive twist. These are heavy on the cinnamon and they just scream Christmas.

If you are looking for some other Christmas desserts to try, why not try our Christmas Cheesecake, Gingerbread Cupcakes, or Christmas Tree Brownies.

How to make Cinnamon Flapjacks - Step by step

Two: In a large saucepan, melt the butter over a low heat.

Three: Add the sugar and golden syrup and once it has dissolved into the butter, remove from the heat.

Four: Stir in the oats, cinnamon and ginger. Taste to see if it has enough cinnamon/ginger in it for you. If not, add more to taste. Mix well so all the oats are covered.

Five: Pour the mixture in to your baking tray and put in the oven for 20 minutes. The middle should still be a little soft, but the edges will have started to brown.

Six: Remove from the oven and allow them to cool completely. Then remove them from the tin and cut in to slices.

Flapjacks are so easy to adapt, which is one of the things we love about them. Use this as a base recipe and then feel free to add in all of your favourite ingredients. Although, maybe not all at the same time.

What to serve with Cinnamon Flapjacks

These are pretty indulgent as they are, so they really don't need anything else. But they go really well with a nice hot drink. Why not try one of the ones we have on the blog:

What oats should you use in flapjacks?

We used rolled oats in our flapjacks, as we find that it holds together a lot better. However, you can use whole oats, you will just get a more crumbly texture.

How to make vegan cinnamon flapjacks

It's really easy to make these cinnamon flapjacks vegan. Simply swap the butter for your favourite dairy free alternative and then make sure that any toppings or add-ins are vegan too.

How to store flapjacks

These flapjacks will keep in an air tight container for around a week to 10 days. After that they will start to dry out. You can also freeze them, individually wrapped, and they will keep in the freezer for about a month.

Why are my flapjacks falling apart?

Slicing them into bars while still warm can often cause them to fall apart. Instead, if you partially score them and then pop them in the fridge, this will speed up the cooling process and result in solid granola bars. Packing the mixture down firmly in the baking tin before baking also helps.

Are these cinnamon flapjacks crunchy or chewy?

These flapjacks are sticky, soft and chewy on the inside and a nice crisp coating - just the way flapjacks should be. If you wanted your flapjacks harder and crispier, then simply bake them for 5 minutes longer.

• Try not to overheat the butter, otherwise it will split like it has in our photo. However it won't make much of a difference to the final taste and texture.
• Add a pinch of salt to intensify the flavour. However we left this out as we were making it for kids to eat.
• Make sure these are gluten free by using certified gluten free oats.
• Leave them to cool completely before cutting. This allows them to keep their shape. 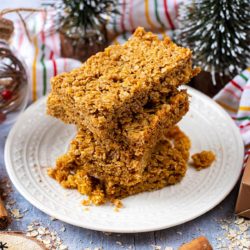 The festive season is all about baking, and these Cinnamon Flapjacks are so easy. Just 6 ingredients, minimal prep and so simple. Great to make with kids.