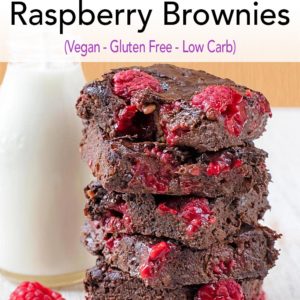 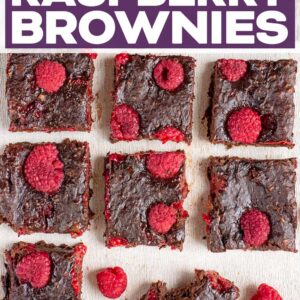 Chocolate brownies have been given a healthier twist and some added fruit and they couldn't be easier to make! These Healthy Raspberry Brownies take just 5 minutes to prepare - and they're vegan and gluten free too!

These raspberry brownies are made with oat flour, sweetened with banana and a little granulated sweetener and have some fruit added to make them lighter than traditional brownies. They are lower in calories than the average brownie too - at just 76 calories each.

These healthy chocolate brownies are a great way to use lots of raspberries. If you are looking for more recipes that use raspberries, why not try our Make Ahead Smoothie Packs, White Chocolate and Raspberry Muffins, Raspberry and Mint Water or Croissant French Toast.

One: In a large mixing bowl, mash the bananas until they are smooth.
Two: Add the cashew butter to the banana.

Seven: Mix everything together in the bowl.
Eight: Pour the mixture in to an 8x6" (20x15cm) baking dish that has been lined with baking paper and then drop the raspberries on top, pushing them slightly into the mixture.

Nine: Put in a preheated oven at 200°C/400°F/Gas 6 for 25 minutes. Leave to cool completely before cutting and keep them in the fridge so they stay firm.

Why should you try them?

We have used a granulated sweetener instead of sugar, but you could use sugar instead if you prefer.

As these healthy chocolate brownies haven't got any eggs or butter in them, they are a great low fat brownie option.

Fruit - Chocolate and raspberry is a delicious combination, but you don't have to use raspberries - you could use pitted cherries, chunks of strawberries, blackberries or blueberries. You could even use a mix of them all.

Additions - You could keep these raspberry brownies as they are, but there are so many other things that you can add in to them. Some of our favourite additions are walnuts, pecans, dark or white chocolate chips, Nutella, peanut butter or Oeros.

What to serve with Healthy Chocolate Brownies

Any of the following drinks will go perfectly with one of these chocolate raspberry brownies:

Store: They keep for a good few days in the fridge, so there is no need to eat them all quickly before they go bad. Although the temptation is strong - they are that good!

Freeze: You can freeze these, making them perfect for batch cooking. Cut them in to portions and then individually wrap them and put them in a freezer bag. They will keep for up to 2 months.

Defrost: You can defrost these at room temperature.

Can I use anything else instead of banana?

I don't think these taste like banana - it gives it the sweetness rather than the flavour. But, I have heard from some people (who hate banana), that it does taste like it. So, is there an alternative?
Banana is pretty much what makes up the majority of the topping, so it's fairly important. But, you can swap it for avocado which will give it the same creamy texture, but not the sweetness.

Are these healthy brownies gluten free?

These are vegan if you use almond milk. You can use another milk if you prefer.

• You don't have to use raspberries - you could use pitted cherries, chunks of strawberries, blackberries or blueberries. You could even use a mixture of them all.
• These brownies are vegan, however you can use cow's milk if you don't want to use nut milk.
• Love peanut butter? Swap the cashew butter for peanut butter.
• You can make these even more indulgent by adding in some dark chocolate chips. 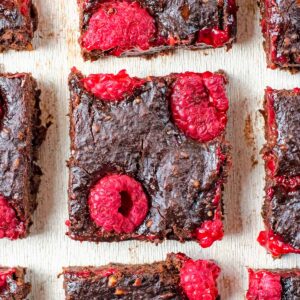 Chocolate brownies have been given a healthier twist and some added fruit and they couldn't be easier to make! These Healthy Chocolate Raspberry Brownies take just 5 minutes to prepare.