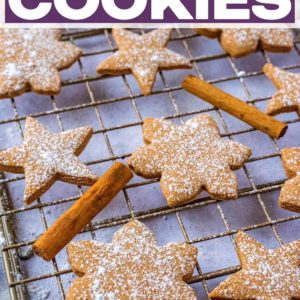 Soft and moist biscuits with a warm cinnamon flavours, these Cinnamon Biscuits are really easy to make and you can go all out with the decorations or just keep them simple with some icing. To make them a little more indulgent, dip them in some dark chocolate. When your kitchen smells of cinnamon, then you know that the Christmas baking has begun. These are perfect any time of year though!

These cinnamon biscuits are the real deal. Buttery, sugary little bites of heaven. I haven't made any lighter changes to them, as I fully believe that sometimes you just need the real thing and Christmas is one of those times.

These spiced biscuits have just enough cinnamon to give them flavour, without being overpowering. They are a soft biscuit, so they don't have any crunch, but we love that about them.

Why not make up a big batch of these and put them in pretty bags with ribbon and give them as a gift? Homemade edible gifts are lovely at Christmas time. Looking for more ways to use cinnamon? Why not try our Cinnamon Stewed Apples, Cinnamon Roasted Almonds, Cinnamon Coffee or Cinnamon Flapjacks?

Two: Add the egg and vanilla and mix. Sieve in the flour and baking powder add the cinnamon and ginger.

Three: Mix together to form a ball of dough.

Four: Transfer to a floured surface and roll out to about 0.5cm/0.25 inch thick.

Five: Cut into shapes and put on a lined baking tray.

Six: Cook for 12-15 minutes. Cool on a baking tray and decorate as you like.

Cinnamon is not only known to have a whole plethora of health benefits, but all that natural flavour means we don't have to rely on sugar as much for flavour. Cinnamon can lower blood sugar levels, has anti-inflammatory properties and reduce heart disease risk factors. Just try to use Ceylon Cinnamon (known as "true cinnamon") rather than Cassia Cinnamon.

We used traditional Christmas cookie cutter shapes for these, but really they could be any shape you like. You could just have circles, or you could let the kids cut them with Santa and snowman cutters and then decorate them. You could just leave these biscuits as they are, but I think some icing sugar makes them look much more festive!

You could actually ice them too. Why not use an orange icing, as orange and cinnamon go so well together and they just scream Christmas. Instead of mixing water in to icing sugar, mix in a little fresh orange juice. It's a game changer when it comes to Christmas biscuit icing

Why not go all out and decorate them and then give them as gifts! Get some nice see-through gift bags and add the biscuits and then tie them up with pretty ribbon. Why not add one of our Hot Chocolate Spoons to go with it?

What to serve with Cinnamon Biscuits

Biscuits and a hot drink are the perfect afternoon pick me and we have lots of choice for you. Why not try one of these:

How many cinnamon biscuits does this recipe make?

This recipe makes 20 biscuits, but that depends on how thin you roll out the dough and and the size of your cookie cutters. So you might end up with more or less. You could make lots of mini biscuits with smaller cookie cutters, and they would look really cute. That might be better for a Christmas party.

How long do I need to let the cinnamon biscuits cook for?

We found that 13 minutes was the perfect amount of time for this recipe. Whilst they might not look cooked, as they will still be soft when the cooking time is up, if you bake them any longer they will be dry. Every oven is different though, so yours might need less time, or they might need a minute longer.

You can store these at room temperature in an air tight container for up to 3 days. They do start going a bit soft after 2 days though.

Yes, you can freeze these before they are cooked. If you have made a big batch and know you won't be able to eat them all, then freeze some and bake the rest. Put them on a baking tray in the freezer for 2 hours. Once they have become hard, you can transfer them to a freezer bag and keep in the freezer for up to a month. You can then put them on a baking tray frozen, and cook them for 10 minutes longer than the cooking time.

• Although it might be tempting to eat these straight from the oven, let them cool first because they will still be very soft when they come out. They will harden as they cool.
• Take these biscuits to the next level by making some orange icing. Mix a little fresh orange juice in to icing sugar and stir until the right consistency and drizzle over the biscuits. You could even put some cinnamon in them for a cinnamon orange icing. YUM!
• We used cinnamon and ground ginger in these biscuits, but feel free to change the amounts depending on which one you prefer. You could also use nutmeg.
• Make these biscuits a little more indulgent by dipping half of each biscuit in to some dark chocolate. 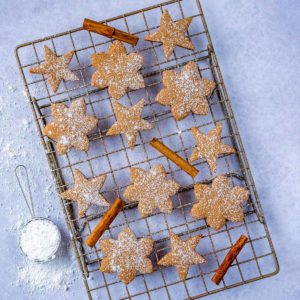 Soft and moist biscuits with a warm cinnamon flavours, these Cinnamon Biscuits are really easy to make.