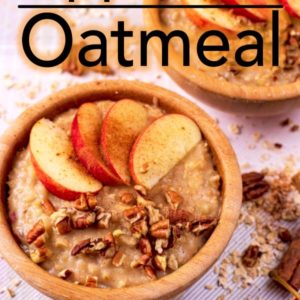 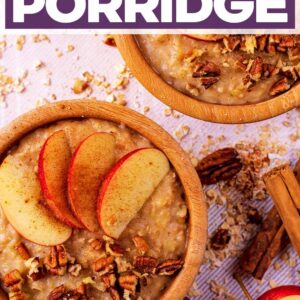 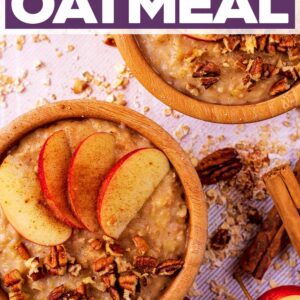 How do you like the sound of starting your morning with the warming taste of apple pie, but much lighter? It sounds good to me! This Apple Pie Porridge is a delicious vegan breakfast made with almond milk, shredded apple, cinnamon and some maple syrup for extra sweetness. It makes getting out of bed on a cold morning that little bit easier!

Just 6 ingredients go in to making this delicious porridge and it is ready in under 10 minutes. Breakfast doesn't have to be complicated and it's a great recipe for kids too!

If you are looking for other ways to use apples, then why not try our Apple Turnovers, Cinnamon Baked Apples or Apple Cinnamon Pancakes.

How to make apple oats - Step by step

One: Grate the apple using a coarse grater.

Two: Put the oats, almond milk, shredded apple, maple syrup and cinnamon in to a pan and gently head for 4-5 minutes until thickened.

Three: Serve in bowls with apple slices and pecans on top.

When we want a healthy and filling breakfast, porridge is always our go to. Porridge is a great way to start the day because oats are a complex carbohydrate, which provide slow-releasing energy throughout the morning and keep you going until lunch.

Porridge made with milk is a good mix of carbohydrates, protein and fibre. If you are making it with water, then this will lower the fat and sugar, but also lower the protein.

Oats contain a type of soluble fibre called beta-glucan, which studies have shown can help to lower your cholesterol. They also contain iron, zinc, magnesium and B vitamins. If you are making this porridge with milk like we have, then the vitamin and mineral content increases, as does the calcium content.

Apples are a good source of fibre, potassium and vitamin C and K. Apples have also been linked to a lower risk of heart disease. One reason for this may be that apples contain soluble fibre, and this can help lower your blood cholesterol levels.

Porridge is all about the toppings. We have added some extra apple slices and crushed pecans on top, but here are some other toppings that work well in this porridge:

This is best eaten straight after cooking it and if you follow this recipe, then you should have enough for 2 portions. However, if you do find yourself with leftover porridge then did you know that you can use it to make pancakes? If you had 80g of porridge, you can add 80g of self raising flour to it, along with an egg, 1 teaspoon baking powder and 50ml of milk and whisk it up to make pancake mixture.

Are porridge and oatmeal the same thing?

Well, yes and no. When it comes to this recipe, yes it is the same thing. Oatmeal is a type of porridge, but porridge isn't always made of oats. It can be made of a variety of grains or legumes.

Is porridge better with milk or water?

This really is a personal preference. Technically, traditional porridge is made with just water and it is still creamy. But, we like ours super creamy and that's why we use milk.

Do you have to add salt to porridge?

No, you don't have to. But, adding some at the beginning of cooking can help add a nice nutty flavour. Don't add it at the end, otherwise it will just taste salty. You only need a tiny pinch.

Can you make apple pie porridge in the microwave?

Yes, this can be made in the microwave if you would prefer. You won't need as much milk and it will only take 3 minutes, stirring half way through.

• Add some pecans on top when serving for some extra crunch.
• Want more spice in it? Add some nutmeg and ginger too.
• You could swap the apple for pear, or use a mixture of them both.
• Want this on a warm day? Make it as overnight oats. Just mix everything together the night before and put in the fridge overnight. Top with extra apple and pecans before serving.
• You can use any milk to make this porridge, or even swap it for water.
• The cooking time for this recipe is for using rolled oats. If you use steel cut oats, then the cooking time will vary. 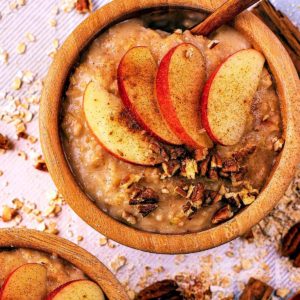 This Apple Pie Porridge is a delicious vegan breakfast. It makes getting out of bed on a cold morning that little bit easier!