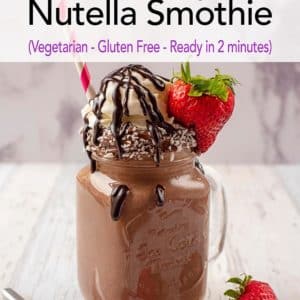 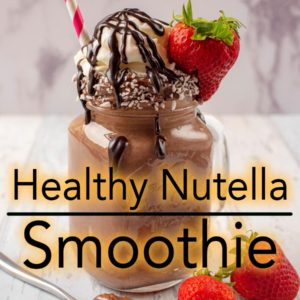 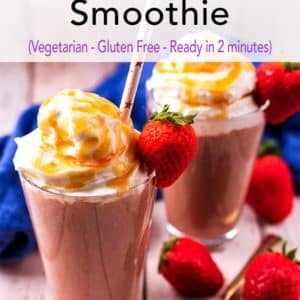 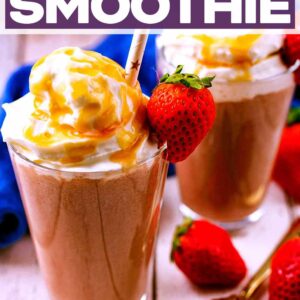 There is just something about starting your day off with chocolate that makes the rest of the day better. You can do that and keep it healthy with this Healthy Nutella Smoothie. More like a milkshake than a smoothie, it is just 4 ingredients and we have included the recipe for our homemade healthier Nutella too.

Dessert for breakfast! Need we say any more? We love ourselves a savoury breakfast of course, as they are a great way to start your day with lots of veggies. But, a sweet breakfast can sometimes make it easier to get out of bed.

The thought of this Healthy Nutella Smoothie will have you, and any kids in the house, jumping out of bed in the morning. Who is going to say no to chocolate for breakfast?

How to make Nutella Smoothie - Step by step

One: Put all of the ingredients into a blender. Blend until smooth.

Two: Pour into glasses and serve.

Because of how much sugar store bought Nutella has in it, we make our own homemade healthier Nutella and it's kind of awesome! It's lower in sugar, palm oil free and can be vegan too. It isn't super low calories, but the ingredients are more nutrient dense.

If you wanted to trick your kids, rather than buy a new jar, you could put the homemade stuff into an old empty jar of Nutella and I don't think they would every know.

We sweeten ours with some dates and a little bit of maple syrup. So it is still nice and sweet, but isn't going to send you in to a sugar coma. If you like yours on the super sweet side, then you could always add more. Or just leave it out completely.

Hazelnuts are a good way to add some healthy fats to your diet and they are high in vitamin E too. Peanut and almond butter seem to get all the glory when it comes to nut butter, but hazelnut butter is delicious and it's what forms the base of our homemade Nutella.

We added a little bit of extra cocoa powder to this to make it extra chocolatey. Did you know that cocoa isn't bad for you and it is considered a 'superfood'?

Lots of people avoid it because they think it is unhealthy, but although a lot of chocolate products are not particularly healthy, that is because of all the sugar that is added to it. It isn't the cocoa itself.

Cocoa powder can provide antidepressant benefits, it is full of antioxidants, and it can also lower blood pressure. That's enough to convince us to enjoy another chocolate smoothie!

How to serve a Nutella smoothie

You could just pour it in to a glass and keep it how it is. However, we like to take it to the next level and add some reduced fat squirty cream (Reddi-wip), a drizzle of caramel sauce and then a strawberry on the side. You could use chocolate syrup too.

Can this Nutella smoothie be made without banana?

There is the dates and maple syrup in the homemade Nutella, but we also added a banana to the Nutella smoothie because not only will that appeal to those with a sweet tooth, but it makes it nice and thick too.
I don't think it tastes overly banana-y, but I know some people really hate the taste so you might want to leave it out. You should replace the thickness though, so add some avocado instead.
You could use something like mango, but it does have a strong flavour.

How to store a Nutella smoothie

Fresh is always best so you should try to drink the smoothie straight after making it. However, to save yourself some time in the morning you can make it the night before. Just store it in an air tight container in the fridge and make sure to give it a good stir before you drink it.

• If you want to keep this totally vegan, then make the Nutella with a non-dairy milk and use non-dairy milk when making this smoothie too.
• Make the smoothie a little more indulgent and more like a milkshake by topping with a squirt of whipped cream.
• If you are making this in the height of summer, throw some ice cubes in before blending to make it super cold.
• Don't like banana? Swap it for avocado so you still have a thick smoothie, but none of the banana taste.
• Give the smoothie a veggie kick by adding a handful of spinach - you can't even taste it! 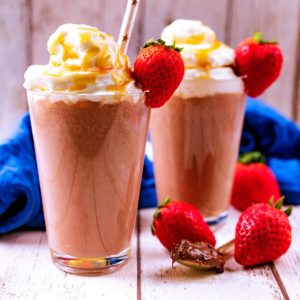 There is just something about starting your day off with chocolate that makes the rest of the day better. You can do that and keep it healthy with this Healthy Nutella Smoothie.