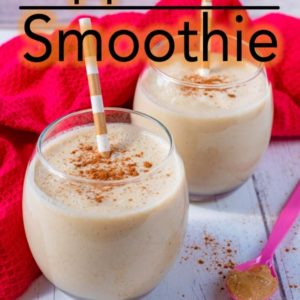 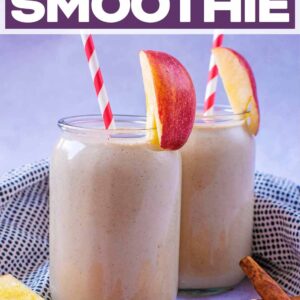 All of the flavours of a comforting apple pie in an easy healthy smoothie for a snack or breakfast on the go. This Apple Pie Smoothie is a quick and delicious way to make the most of apple season. All of the taste of a pie, with less of the calories. Kids will love this apple smoothie too!

No, I didn't throw a slice of apple pie into my blender with some milk - but it definitely tastes like it! Instead, we have combined apples with some nut butter, bananas, milk and cinnamon to make a smoothie that the whole family will love.

Apple pie has to be one of the best desserts out there, so who wouldn't want a breakfast that tastes just like it, and is healthy too? If you are looking for some other ways to use apples, why not try our Apple Turnovers, Cinnamon Stewed Apples or Cinnamon Baked Apples.

One: Add the banana, apples and nut butter to a blender jug.

They are a good source of fibre, potassium and vitamin C and K. Apples have also been linked to a lower risk of heart disease. One reason for this may be that apples contain soluble fibre, and this can help lower your blood cholesterol levels.

You can store any leftover smoothie in the fridge for 1-2 days. The ingredients may separate, but this is normal. Just give it a quick stir before drinking. It's always best to make this smoothie fresh - luckily it is really quick to make.

How many calories are in an apple pie smoothie?

There are 289 calories in this recipe.

Can I use frozen apples?

Yes, you could use frozen apples.

Do I need to peel the apples first?

Yes, we peeled them first as we don't like the texture of the blended apple skin.

How do you sweeten a smoothie?

This is sweetened with just the apples and banana. However, if you wanted it extra sweet then you could apple a little honey or maple syrup.

How to make a vegan apple pie smoothie?

To make this vegan, use a plant based milk and yoghurt and if you are sweetening it, make sure to use maple syrup rather than honey.

How can I thicken a smoothie?

To thicken this, you can add some ice and blend it up with everything. It will give you more of a slushy texture though. You could also blend up some oats with it - this will make it more filling too.

• We added cinnamon to this smoothie, but give it a real autumn smoothie by using some nutmeg and ground ginger too.
• You can use any milk you like for this. We found almond milk gave it a real nutty flavour, but dairy milk or soy would work too.
• The world is your oyster when it comes to nut butters in this. Peanut, almond, cashew, hazelnut - they all go really well with apple.
• What made a really nice change was using half an apple and half a pear to make a smoothie.
• You can turn this in to a smoothie bowl by making it a little thicker. Pour it in to a bowl and then load it with toppings.
• If you want to make this more indulgent, then top it with some whipped cream and caramel sauce, like we have in the photos. 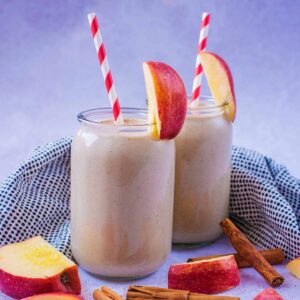 This Apple Pie Smoothie is a quick and delicious way to make the most of apple season. All of the taste of a pie, with less of the calories.