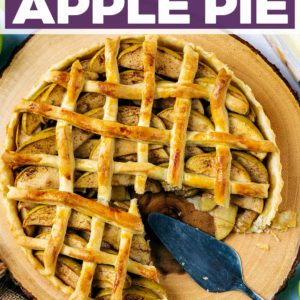 Homemade apple pie with a healthy twist. Flaky pastry loaded with sweet apples and cinnamon and a lattice pastry top. At just 200 calories a slice, this Healthy Apple Pie has all the comforting flavour you know and love, but a little bit lighter.

An apple pie is perfect for any occasion. This healthy apple pie still has all that sweet apple pie flavour, but lightened up a little. A traditional slice of apple pie has between 300-400 calories, so this is a lighter option. The world healthy is of course subjective, but when compared to a more traditional store bought pie, this is much lighter. But it doesn't compromise on flavour.

If you are looking for some more fruit based desserts, try our Fruit Platter, Grilled Peaches, Baked Bananas or Apple and Blackberry Crumble.

One: Preheat your oven to 200°C/400°F/Gas 6. In a bowl, mix the sliced apples, maple syrup, vanilla, cornflour and cinnamon until all the apples are coated.

Two: Roll out the dough and put into a greased pie dish. Cut around the edges and save the leftover pastry. Prick the base of the pastry with a fork. Lay the apple slices on the bottom of the pastry and build up in layers.

Three: Roll out the remaining pastry and cut into thin strips. Lay the strips in a lattice pattern over the top of the apples. Cover in foil and cook for 20 minutes. Remove from the oven, brush the egg over the pasty and return to the oven, Cook for a further 20-25 minutes, until golden brown.

Four: Cool for at least 30 minutes before serving

Let's us start off by saying that this is still a sugary pie. There is pastry and there is maple syrup coating the apples, but we have tried to make a couple of little lighter changes.

Firstly, apples are super nutritious. They are a good source of fibre, potassium and vitamin C and K. Apples have also been linked to a lower risk of heart disease. One reason for this may be that apples contain soluble fibre, and this can help lower your blood cholesterol levels.

As you can see on the pictures of the pie, we have used a lattice effect on top. We could have covered it in pastry to make a lid, however we went with strips of pastry because it means using less pastry and also we think it looks prettier.

Apple pie needs to be sweet. Whilst the apples are naturally sweet, especially when baked, we added a little bit of maple syrup to add extra sweetness. Apple pie would usually be loaded with granulated sweetener, so by using a little maple syrup with have saved a few calories in this pie.

This is a really good basic fruit pie recipe that you can adapt. You could use half apples and pears for a nice autumnal mix. You could also do a berry mix of blueberries, raspberries, strawberries and blackberries. Or a stone fruit pie with peaches and nectarines.

Instead of using cinnamon, you could swap it for ground ginger or mixed spice, or even use a mixture of the three.

What to serve with it

Now, this is a source of great debate - especially in our house. Whilst you could just eat it by itself, straight out of the pan, it is delicious with vanilla ice cream or custard. Custard for a warming and comforting winter dessert and ice cream in the summer. Let us know in the comments what you like to serve apple pie with.

If you are looking for a hot drink to have this with as a bit of an afternoon pick-me-up, then why not they our Chai Tea Latte, Cinnamon Coffee or Slow Cooker Hot Chocolate.

How to store apple pie

How can you make sugar free apple pie?

If you want to make this even lighter, then you can leave out the maple syrup and you will just have the natural sweetness from the apples.

Can you make apple pie without egg?

You don't have to add the egg wash to the pastry, but it does make it nice and golden.

Do you need to cook the apples first?

No, there is no need to cook the apples in a pan first. They are cooked in the pastry in the oven for 45 minutes, and if they are sliced thin enough this is plenty of time.

Do I have to put foil on top?

Yes, the foil is an important part of this recipe. Because we have added a lattice top, rather than a full pastry cover, the foil seals in the steam that the apples release while baking. This softens the apples and also keeps the top layer of apples from burning.

How do you make the lattice topping?

It is actually far easier than it looks. You lay half of the pastry strips down on top of the apples one way and then weave the remaining strips under and over in the other direction.

• Why not make this healthy apple pie extra fancy by cutting out some tiny pastry flowers with cookie cutters to put on top.
• Fancy something a little different? Swap half the apples for pear, or even make a peach version of this.
• Make sure the apples are sliced really thin. If they are on the thicker side, then they won't cook fully in the oven and you will have hard apple slices. You want them to be really soft and sweet.
• Although you will be super eager to cut right in to the pie to eat it, you should try to leave it to settle and cool for 2 hours just so that you can cut it and pull out a full slice without it falling apart. 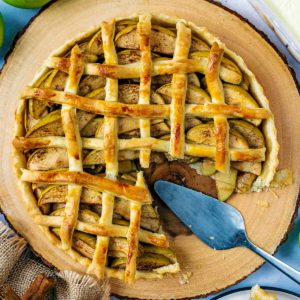 At just 200 calories a slice, this Healthy Apple Pie has all the comforting flavour you know and love, but a little bit lighter.