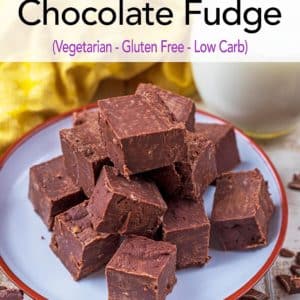 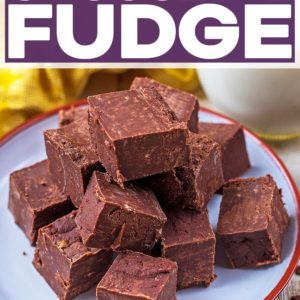 This Slow Cooker Chocolate fudge couldn't be easier, as it's so simple to make and there are so many variations of it that you can have it a different way every time. Fudge is such a delicious and indulgent treat and if you haven't made it yourself before, you are going to be asking yourself why not! Slow Cooker Fudge makes a lovely festive treat too.

Having a big batch of homemade chocolate fudge in your fridge is what dreams are made of! This slow cooker version is the best way to make it in my opinion and it makes a great gift too. Keep slow cooker fudge plain, or add your favourite chocolate bar chopped up as a topping. We have lots of suggestions of ways you can make this chocolate fudge.

This isn't traditional sweet shop type fudge, as the slow cooker doesn't get to the high temperature needed to make that. Instead, this is delicious chocolate fudge recipe!

How to make slow cooker fudge - Step by step

One: Put all of the ingredients into the slow cooker. With the lid off, on low, stir every 15 minutes.

Two: When the first crust forms (this will be like a skin on the top of your mixture) stir it really well and then repeat until your second crust forms. After the second crust has formed, it's ready to pour in to your tray or mould. This will take around an hour and a half.

Three: Refrigerate until firm, overnight is best. You can also place it in the freezer if you need it to set faster.

What chocolate to use

You have lots of options here when it comes to making slow cooker fudge - milk chocolate, white chocolate or dark chocolate. The only thing we wouldn't recommend using is cooking chocolate as it has different fat and cocoa solid, so ends up producing an oil, which isn't what you want.

We personally find that the cheap, supermarket own brand chocolate, is what works best for making slow cooker chocolate fudge.

If you are going to use white chocolate, then use 600g instead of 500g because it doesn't have the same amount of cocoa solids as milk chocolate.

We have provided you with the basic recipe for fudge in slow cooker, which is amazing just as it is, but there are so many things that you can add to it.

Raisins are a really easy one to mix into the fudge mixture, with a tiny splash of rum if you want to go the rum and raisin route. You can also stir in some chopped nuts (this is all done after the second crust and before pouring it into the moulds). Be careful not to add too much filling, as you don't want to make it too wet and have trouble setting.

Our favourite way to get creative with this slow cooker fudge recipe is to take our favourite chocolate bar, chop it up and then sprinkle it on top of the fudge mixture before serving. We love a Kinder Bueno version.

I mean, who doesn't love a boozy treat!? Boozy fudge is amazing and it's great if you are making this for a gift. But, it isn't that simple. You don't want to add too much, because adding liquid can be tricky in terms of the fudge setting.

I would recommend adding a tiny bit on your first go making slow cooker chocolate fudge and then maybe adding a bit more next time if it worked well. Remember, you can always add more, but you can't take it out.

How long does fudge take to set?

You need to put it in the fridge (or freezer if you want to speed things up) for around 5 hours to set, however over night is best.

We used a metal baking dish that had been lined with baking paper. However, you could use fudge moulds and then once it is set you can just pop the individual pieces out.

What to do if the fudge doesn't set?

What to do if fudge is oily?

If your fudge looks really oily on top when it is in the slow cooker, don't worry! Just dab all the oil off with some paper towel and then stir it really, really well and it will come back together just fine.

How to store fudge

Although it is tempting to eat the whole batch all in one go, try to resist as it's go good to have some stored away for what a chocolate fudge craving hits.
Store your fudge in an airtight container in the fridge for up to 3 weeks or in the freezer for up to 3 months.

• If you are adding alcohol, add a little bit the first time you make this slow cooker fudge recipe and if it works well then add a little more the next time you make it. If you have added too much, you can't take it out.
• You do need to make sure you are stirring this often, so it isn't a hands-off recipe like most slow cooker ones are. However, you will get the best texture fudge this way.
• If you are stacking the fudge in a container in the fridge, put some baking paper between each layer to stop it from sticking. 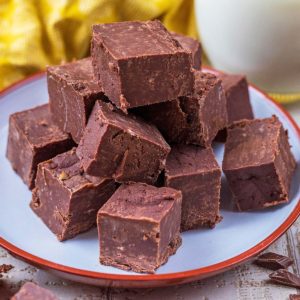 This Slow Cooker Chocolate Fudge couldn't be easier. It's so simple to make and there are so many variations, that you can have.