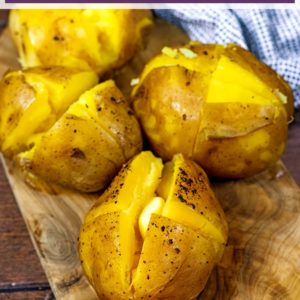 Slow Cooker Jacket Potatoes couldn't be easier! Just a couple of minutes of prep time and a few hours in the slow cooker and you have yourself soft and fluffy potatoes that are ready to be loaded with your favourite toppings. A fuss free family favourite, these are delicious and seriously fool proof.

Whether you called them baked potatoes, or jacket potatoes, we all know them as being cooked in the oven for hours and heating up the whole kitchen. It's SO much easier to do them in the slow cooker. Very little prep time, cheaper than cooking in the oven and you still get the light and fluffy centres. The best thing is, you can put them on and then head out and leave them cooking.

How to make slow cooker baked potato - Step by step

One: Wash and dry the potatoes and then rub them with oil, salt and pepper. Individually wrap them in foil.

Two: Put them in the slow cooker and cook on high for 5 hours or low for 8 hours.

What potatoes to use for jackets

Whilst you could use any potatoes for this recipe, making it great for a budget friendly meal where you use whatever you have, certain potatoes will give you the perfect slow cooker baked potato.

We find that King Edwards, Russets and Desiree potatoes are the best. Firstly, their skin doesn't hold moisture very well, and Russet skin is nice and thick, so they get nice and crispy. Whilst slow cooker jacket potatoes don't get as crispy as they would in the oven, using this potatoes will help them to crisp up.

Also, these variety of potatoes have a higher starch content, which means that they get nice and soft and fluffy on the inside, especially when they are cooked low and slow like this.

We have just cooked them in a little oil, and seasoned them to taste. So, as they are they are very nutritious. You could just eat them like that, or load them with toppings - but this is where you can add a lot of calories and fat. We have some topping suggestions below.

We have kept it simple and just seasoned these slow cooker jacket potatoes with sea salt and black pepper. However, there is no reason why you couldn't go a bit crazy with the seasoning.

Why not sprinkle a little smoked paprika or cayenne over them. You could also give them an Italian flavour boost with some dried oregano and basil rubbed over them.

You could also add flavour with the oil you use. Why not use an infused oil like garlic oil or chilli oil.

We went with the classic topping of sour cream, cheese, bacon and chives. Some spring onions would add some nice crunch too. But there are so many options! Why not check out our post on 10 Healthy Baked Potato Toppings. Also, all of these would be delicious on a slow cooker baked potato:

What is the difference between a jacket potato and a baked potato?

They are the same thing. In the UK, we call them jacket potatoes, simply because they are potatoes with the skin left on, like a jacket. But, they are still potatoes that have been baked.

Do you get a really crispy skin cooking potatoes in the slow cooker?

Sadly, no. That's the one downside to this recipe. You will get parts of the potato that have little crispy bits, but you don't get that all over crunch that you would from baking them in the oven. But, the positives of this recipe far out weight that small negative. If you did want to have a crispy skin, you could always put them in the oven for 20 minutes to crisp up. But, we honestly didn't miss the crispy skin. Also, see our extra tips below for getting crispier potatoes.

Does the size of the potato matter?

Yes, the size of the potato makes a difference when it comes to cooking time and them all cooking evenly. We used large potatoes that were about 350g each. At this size, they take 5 hours on high to cook, or 8 hours on low. If you use smaller potatoes, then you could probably get away with just cooking them on high for 4 hours. Don't worry too much about the cook time of these, as you can't overcook them - slow cookers are really forgiving that way. Having evenly sized potatoes means they will all be cooked at the same time too.

Do I have to add oil?

No, you don't have to add oil. We find that it adds flavour and helps to brown the skin, but you could leave it off. This would change the nutritional information. 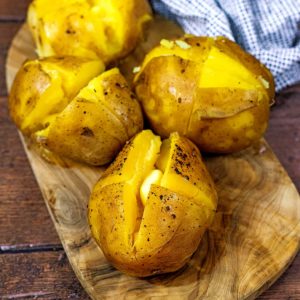