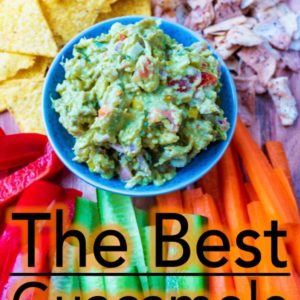 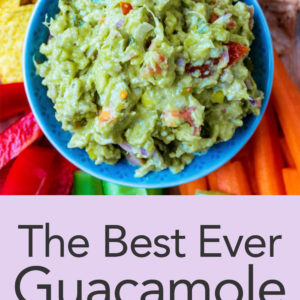 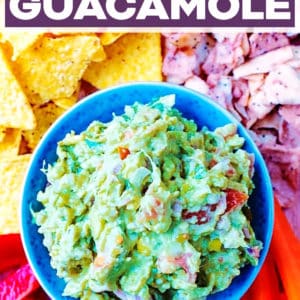 This is the BEST Guacamole Recipe. The only guacamole recipe you will ever need. Trust us - we have done a lot of taste testing.  Such a simple recipe to make, easy to double or triple when feeding a crowd and a little secret ingredient that takes it to the next level. Add it to tacos, scoop it up with tortilla chips, dip a carrot in to it or just eat it with a spoon (no shame).

Store bought guac just never tastes the same. It's always scarily smooth (we like some chunks in ours) and has a weird acidic taste. You might think it is more convenient, but it's actually really easy to make yourself and you can adapt it to suit your own taste too.

What makes this the BEST guacamole recipe? Well, we like to consider ourselves experts after years of taste testing. We think that the best guacamole is fully loaded, and has lots of chunky added ingredients. So, when you scoop it up with some tortilla chips, all the ingredients cling to it.

Tomatoes add some freshness, lime juice adds plenty of zest and tang and a little garlic gives it an edge. Also, it's our secret ingredient.

One: Scoop out the flesh of the avocado and mash until smooth in a pestle and mortar.Two: Prepare the other ingredients.Three: Add the rest of the ingredients to the mashed avocado and stir until mixed well. Taste and season again if needed.
Four: Serve in a bowl with tortilla chips and veggie sticks.

That's right, our secret ingredient is BACON! Obviously if you don't eat meat, or just don't like bacon, then feel free to leave it out. But it seriously takes guacamole to the next level, and you hardly need to use any at all. Just enough to flavour it.

Just 2 rashers of bacon in a big batch and it totally transforms this classic dip. You can taste little hints of saltiness and then you get the occasional crunch from a crispy bit of bacon. Seriously - it makes next level guacamole.

It was only recently that I found out that there were people out there that didn't like coriander. Apparently some people think it tastes like soap. We are firmly in the "loving it" camp when it comes to coriander, but if you aren't a fan then you can leave it out or swap it for something like basil.

What to serve with guacamole

Guacamole is the ultimate party food dip, so some tortilla chips, pita chips and veggie sticks (like in the photo) are essential. But guacamole is also far more than a dip.

We love it with poached eggs for breakfast, in a Vegan Burrito Bowl, served with Grilled Chicken Tacos, or loaded on top of our Hidden Vegetable Beef Burgers.

How to choose an avocado

As the meme goes, there are a few different stages of avocado. Hard, hard, hard, hard, brown. Well, there is a perfect stage, that makes the best guacamole and we have some tips on how you can choose the best ripe avocado.

Make sure the stem is still attached and then gently press on one end and although it should be firm, there should be a little give to it as well.

How to cut an avocado

My mum keeps telling me that she doesn't eat avocado because she doesn't know how to cut one open. She is far from a novice in the kitchen, so I figured if she doesn't know, then maybe other people don't either.

You can get a handy little avocado cutter, that is a 3 in one for the different stages of getting the flesh out, but you can just use a kitchen knife too.

Simply cut the knife in to the skin all the way round lengthways, until you hit the stone. Then pull the avocado apart by twisting it. To remove the pit, strike your knife carefully in to the pit and then twist to the side and pull it out. You are now ready to get the good stuff out and you can do that just by using a spoon to scoop out the flesh from the skin.

How to stop guacamole turning brown

If you are making this ahead of time for a party, or you just like to have some guacamole in your fridge for when a craving hits, then you are going to want to make sure it doesn't turn brown, and it looks and tastes as fresh as possible.
You want to make sure that it is tightly sealed either in Tupperware or with some cling film (plastic wrap) over the bowl before putting it in the fridge. Try to eat it within 24 hours for freshness. The lime juice in this guac recipe also helps to slow down the process too.

• Want to add something new? Try crumbling some feta on top of the guacamole just before serving.
• Instead of using chopped jalapeno, why not mix a couple of tablespoons of salsa into the guacamole?
• Keep this vegan by skipping the bacon and adding a little extra salt. 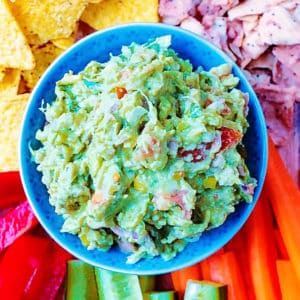 Now you can make the ultimate guacamole yourself. Add it to tacos, scoop it up with tortilla chips, dip a carrot in to it or just eat it with a spoon (no shame).