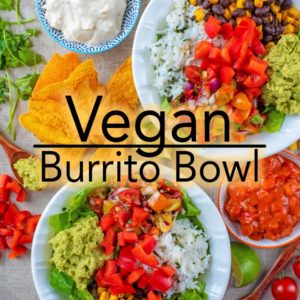 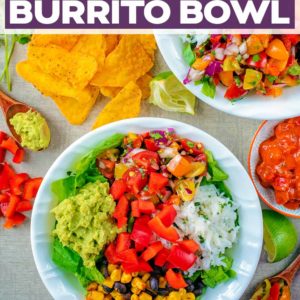 This vegan burrito bowl is packed with flavour and a kick of heat, but super simple to make and ready in under 20 minutes. We truly believe that Mexican food doesn't have to be covered in cheese and filled with meat to be delicious and it can also be healthy too - this vegan burrito bowl certainly proves that.

Spicy and smokey black beans, zesty salsa, crunchy lettuce, comforting rice and a big pile of guac go in to making this epic vegan burrito bowl. No need to get your hands messy eating a burrito, as all your favourite burrito ingredients are loaded in to a bowl for ease. It's so easy to adapt too, so everyone gets a burrito bowl they will love.

If you are looking for some other vegan recipes to try, then why not try our Vegan Eggnog, No Mayo Coleslaw, Butterbean Soup, or Cauliflower and Potato Curry?

One: In a bowl, mix together the black beans, sweetcorn and all the spices. Heat a little oil in a pan and add the bean mixture. Gently cook for 3-4 minutes.

Two: Make the guacamole by mashing the avocado in a bowl and then stirring in the coriander, salt, pepper and lime juice.

Four: Put the rice in a pan with boiling water and simmer for 15 minutes until cooked. Drain the rice and then stir in the coriander and lime juice.

Five: Build the burrito bowl up by dividing the shredded romaine lettuce between 2 bowls.

Seven: Add some of the bean/sweetcorn mixture.

We have made it our aim to eat more vegan meals as not only is it good for our health and the environment, but it allows us to really appreciate the flavour of the vegetables and the herbs and spices we are using without having the flavour of cheese to overpower them.

Vegan meals tend to be nutrient dense and full of colour, which is what we are going for with all our meals at the moment. We are trying to think less about ourselves, and more about the environment.

A plant-based diet is better for the environment, as it requires much less energy and farmland to produce plant-based food. Just some food for thought.

This burrito bowl is all about the creamy black beans which make it a filling and protein packed meal. Black beans (also known as Turtle beans or frijol negro) are a staple in Mexican cuisine and if you haven't cooked with them before, then stock your cupboards up with them.

If you live with someone who wouldn't want to eat a vegan meal, then it is easy to add some cooked chicken breast or prawns to this for an added protein boost or keep it vegetarian and add some cheese to it. Feta works really well.

That's what I love about burrito bowls, you just throw whatever you want in, and it can be different every time. But don't think that you need to eat meat (or meat alternatives) or cheese for protein as this dish has plenty of it already.

What to do with leftovers

If you have any topping leftovers, don't chuck them as they make a great filling for tacos and enchiladas. You can even stuff it into a pepper or a mushroom. This burrito bowl is also just as good cold the next day for leftovers. Whether you eat it straight away or for lunch the next day, grab some tortilla chips and dig in.

It definitely is. It includes a good mix of protein, carbs and healthy fats. You could make it lower in carbs by swapping the rice for Cauliflower Rice, or just serving it on top of shredded lettuce.

As long as you make sure that there is no cross contamination, then this is gluten free.

How to store a vegan burrito bowl.

These bowls will keep well in the fridge for up to 4 days.
To store, it is recommend putting the lettuce and avocado in a separate container than the rest of the ingredients. That way, the beans can be reheated (if desired) in the microwave, and then you can make up the full bowl afterwards.

• Instead of using romaine lettuce, why not try some other greens like spinach or kale for a nutritional boost in this vegetarian burrito bowl.
• If you don't want it to be vegan, some leftover chicken shredded on top is a good addition, or some chunks of your favourite cheese.
• Don't have any black beans? You could use chickpeas, pinto beans or kidney beans instead.
• Are you one of the few people out there that doesn't like guacamole? Fear not! You can still get all that delicious creamy flavour by using hummus instead. Even if you love avocado, make some avocado hummus to mix things up a bit. 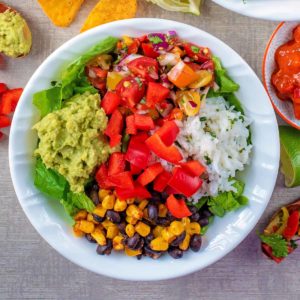 This vegan burrito bowl is packed with spices and flavour, but super simple to make in under 20 minutes.