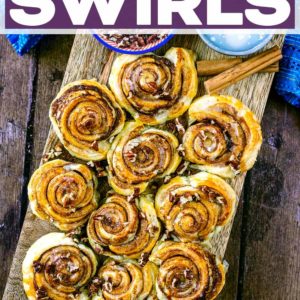 Is there anything better than warm pastries for breakfast? These Cinnamon Swirls couldn't be easier and they are filled with a warming cinnamon sugar and zesty orange and then drizzled with icing warm from the oven. These are a much easier version of cinnamon rolls. All the flavour, with minimal effort!

Cinnamon rolls might just be one of my favourite little indulgences, but they aren't the easiest things to make. So, when we are short on time we make these Cinnamon Swirls, which have all the flavour of cinnamon rolls, but they use puff pastry instead. No need to wait for dough to rise, just unwrap the pastry and spread over the incredible cinnamon sugar.

These cinnamon swirls couldn't be easier. They are ready in under 30 minutes and they are certainly a crowd pleaser. They will go down a storm with cinnamon lovers and they are that good, that they will even convince people that don't love cinnamon.

If you are looking for other ways to use puff pastry, then why not try our Sausage Mummies, Easy Mushroom Tartlets, Cheese Straws or Easy Sausage Rolls?

One: Preheat your oven to 180°C/350°F/Gas 4. Line a baking tray with baking paper.
Two: Mix together the butter, brown sugar, cinnamon and orange zest to form a paste.

Two: Spread the paste evenly over the pastry.

Three: Roll the pastry up and slice into ten equal pieces. Put onto the lined baking tray and brush with whisked egg. Cook for 20 minutes.

Four: In a small bowl, mix the icing sugar and water.

Five: Drizzle the cooked swirls with the icing and sprinkle over the chopped pecans.

Cinnamon is not only known to have a whole plethora of health benefits, but all that natural flavour means we don't have to rely on sugar as much for flavour. Cinnamon can lower blood sugar levels, has anti-inflammatory properties and reduce heart disease risk factors. Just try to use Ceylon Cinnamon (known as "true cinnamon") rather than Cassia Cinnamon.

Cinnamon, a spice which comes from the inner bark of a small evergreen tree, was once traded as currency, as we can see why! Not only does it was a lovely warm flavour, but it also contains large amounts of polyphenol antioxidants. Antioxidants can help protect the body from disease and have been found to have anti-inflammatory effects. There is also evidence to suggest that the eating cinnamon is associated with a short-term reduction in blood pressure.

These are a really simple recipe, which is what we love about them, so there isn't much to change. However, we have a couple of swaps so you can make it a different way next time.

You could mix a little bit of cocoa powder in to the cinnamon sugar to give it a chocolatey flavour. You could also swap the icing for a cream cheese frosting.

What to serve with Cinnamon Swirls

We would quite happily eat these for breakfast and they are what we make on Christmas morning. But, we also think these are the perfect afternoon treat with a hot drink. Why not try one of the ones we have on the blog - here are some of our favourites:

How to store cinnamon swirls

You can store these in an air tight container at room temperature for up to 2 days, or in the fridge for a week.

Can you freeze cinnamon swirls?

Yes, you can freeze these, but they are better frozen without being iced, as the icing goes a bit funny when it has defrosted and the rolls are a bit soggy. Once they have cooled, wrap them individually and then put them in a freezer bag. They will keep in the freezer for up to a month.

How to reheat cinnamon swirls

Once these are fully defrosted (overnight in the fridge), you can warm them in the oven for 10 minutes.

If you use gluten free puff pastry and make sure that there is no cross contamination, then this is a delicious gluten free treat.

• Add some cinnamon and orange to the icing for extra flavour.
• You can make a chocolate version of these by mixing a little cocoa powder in to the cinnamon sugar.
• The pecans are optional, but they add a nice texture. You could swap them for walnuts or flaked almonds.
• You could mix some ground ginger into the cinnamon for a mixture of flavour, but still those warm flavours. 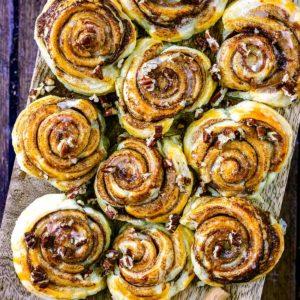 These Cinnamon Swirls couldn't be easier and they are filled with a warming cinnamon sugar and zesty orange and then drizzled with icing.