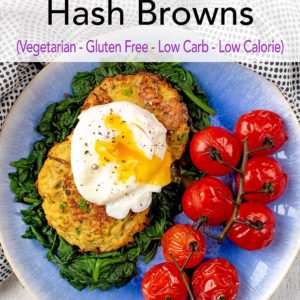 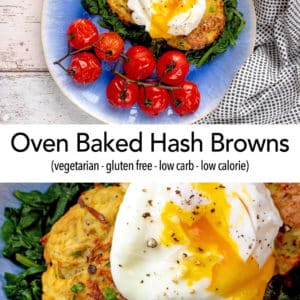 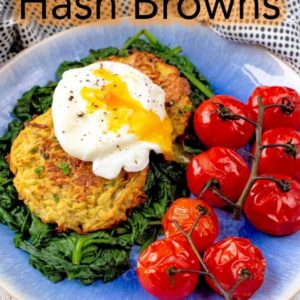 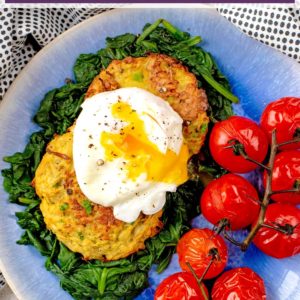 These 3 Ingredient Oven Baked Hash Browns are delicious rounds of crispy shredded potato and although usually deep fried, we have oven baked these healthy hash browns to keep them lighter. They are still just a crispy and with all the flavour, but you are saving a few calories.

I love hash browns! The only problem with hash browns is that they are usually fried when you order them in a restaurant and they are overly greasy and therefore not enjoyable.

They don't have to be fried and they taste just as good baked in the oven. They still get the same crispiness that comes from frying them, but without all the oil. So, you get to have an indulgent weekend breakfast that isn't really that indulgent.

One: Grate the potato and onion on the large side of a box grater or in a food processor.

Two: Put the grated potato and onion at the centre of a kitchen towel and squeeze out the excess liquid.

Three: Put the mixture into a bowl and add the egg and a little salt and pepper and garlic and combine.

Four: Lightly grease a baking tray and get handfuls of the mixture and shape in to circles. Put them on the tray and gently flatten - the mixture should make 8 hash browns.

Instead of frying them, or getting them out of the freezer ready made, try making these super simple baked hash browns. Who knew you could have healthy hash browns with all the crispiness, but made in the oven.

Although these hash browns take a bit longer to prepare than say throwing some cereal in to a bowl, that doesn't mean they are complicated. Once you have mixed the shredded potato with all the other ingredients and shaped them, they are in the oven and you don't have to worry about them. You are free to enjoy your morning. Unlike frying where you would have to watch them all the time.

You can also add different flavours to them if you like. Add Mexican or Italian seasoning for a change.

Best potatoes to use

I usually go for waxy potatoes like Maris Pipers and Jersey Royals, as they tend to hold their shape better. However, if you want a super crispy hash brown, then go for a starchy potato like russets - they might fall apart, but what is stuck together will be nice and crispy. It really comes down to personal preference.

What to serve them with

These are a delicious breakfast item, so we like to serve them with a poached egg on top. Struggle to make poached eggs? Check out our tutorial on How To Make The Perfect Poached Egg. Another great addition to these is our Homemade Healthy Ketchup or our Healthier BBQ Sauce.

Can hash browns be frozen?

These are perfect for freezing! Because they take a little longer than the average breakfast to make, batch cook them and then freeze then in individual portions for a quick weekday breakfast. Hash browns don't just have to be for the weekend!
Once the hash browns have cooled down, you can either wrap them individually or you can stack them with baking paper in between each one and then put them in a freezer bag. Simply take one out of the freezer as and when you need one and defrost fully before reheating.

• You can add loads of different flavours to these hash browns. Give them a Mexican twist by adding Mexican seasoning. Give them a Spanish twist by mixing in some smoked paprika. Or simply add a little garlic powder.
• You can eat these hash browns for breakfast with eggs on top or have them as a side dish. They are super versatile.
• Try making them with sweet potatoes - cooking time may vary and they won't get quite as crispy, but it makes a nice change.
• You can make them extra crispy by adding them to a pan with a little oil for a minute each side just before serving.
• We served these with poached eggs and some wilted spinach, but they are great with scrambled eggs and wholemeal toast too. 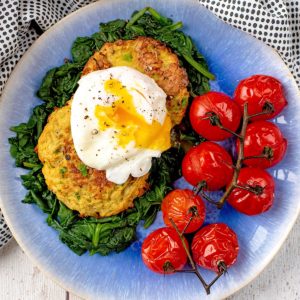 These Oven Baked Hash Browns are delicious pieces of crispy shredded potato and are not an everyday breakfast item, but one we like to enjoy at the weekends or when I have a big day ahead.