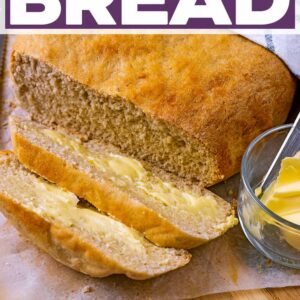 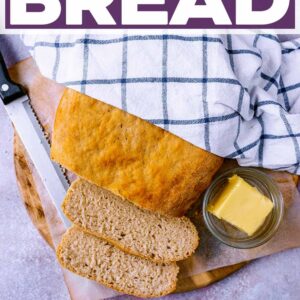 This slow cooker bread recipe is SO easy to make, with no rise time, and gives you the most delicious soft and fluffy bread - all done in your slow cooker. Get all the flavour, texture and smell of homemade bread, without having to turn your oven on. There is so much more to slow cookers than just stews.

You still get that soft and fluffy inside, and a crunchy crust on the outside, all by making bread in the slow cooker. It's not an exaggeration to say we are obsessed with this homemade bread recipe because of how simple it is and how good it tastes.

If you are looking for other different ways to use your slow cooker, then why not try our Slow Cooker Mulled Wine, Slow Cooker Jacket Potato or Slow Cooker Hot Chocolate.

How to make bread in the slow cooker - Step by step

One: In a large mixing bowl, combine the flour, salt and yeast. Make a well in the flour mixture and add the water.

Two: Using a wooden spoon, pull a little of the flour mixture into the water and stir. Continue pulling more flour in and combine until a workable dough is formed.

Three: Transfer the dough to a floured surface. Kneed until the dough is smooth and elastic.

Four: Form the dough into a ball and put onto a piece of lightly oiled baking paper. Lift the paper and dough into the slow cooker.

This slow cooker bread is perfectly cooked. It has a light and fluffy inside, which isn't dense at all, and the outside has a little crunch to it which all homemade bread should have in our opinion. However, it won't get the same crunch as oven baked bread without a couple of tweaks. If we are in a rush, we just leave it as it is though and it's still delicious.

If you want a little extra crunch on top of the loaf, then after the two and a half hours cooking time, you can flip it over and cook for 30 minutes more in the slow cooker.

You can remove the baking paper so the bread makes contact with the slow cooker for extra crispiness. Alternatively, and quicker, you can put it in the oven at 220°C/425°F/Gas 7 for 10 minutes or in the air fryer (if you have one big enough) for 4-5 minutes at 180°C. This will give an amazingly crispy crust.

We have give the recipe for a basic slow cooker bread, however there are so many options when it comes to flavour add-ins. Here are some of our favourites:

You can also vary the flour that is used. If you wanted a wholemeal loaf, then swap half the flour for wholemeal flour. You could swap all of it, but we find that the loaf ends up too dense.

What to serve with Slow Cooker Bread

I mean, I am sure it is fairly obvious - anything that you would use bread for. But, we have lots of delicious suggestions for you.

If you are looking for a soup to dip this delicious slow cooker bread in to, then why not try our Creamy Vegetable Soup, Kale Soup or Roasted Red Pepper and Tomato Soup.

Bread is the key ingredient in a sandwich and we have some epic ones to share. Use this bread to make our Best Prawn Sandwich, Leftover Roast Beef Sandwich, Epic Cheese Sandwich or Loaded Tuna Sandwich.

This bread toasts really well. So, for a simple meal or snack, why not spread something on it toasted? We would recommend our Vanilla and Honey Almond Butter, Strawberry Puree (like a healthy jam) or Homemade Healthier Nutella.

Store: Homemade bread is never going to last as long as store bought bread, but that's a good thing because it means it doesn't have loads of additives. If you store the bread in an air tight container, in a cool dry place, then it will last for 2-3 days. Heat and humidity will cause the bread to get mould.

Freeze: This freezes so well. Simply slice it and then put into freezer bags and it will keep for up to 2 months.

Defrost: If you are toasting it, then there is no need to defrost it as it will toast straight from frozen. If you are using the slow cooker bread for sandwiches, then you can just leave it out at room temperature to defrost for an hour or so.

How do I know when the bread is cooked?

We have always had perfectly cooked bread after two and a half hours, but timings will differ depending on your slow cooker. Tap the bottom of the bread and it should be hard and not still soft, spongy and dough like. If you have a digital thermometer, then you can check the internal temperature and it should be 95°C/200°F.

What size slow cooker to use?

We used a 4.5L oval slow cooker. You can use a smaller, round, slow cooker, but just be aware that the bread might take on the shape of the slow cooker a little more.

Do I have to knead the bread?

Yes! I know it seems like a lot of effort, but it is needed. It helps with developing the gluten structures and without it you will have a dense loaf that sinks in the middle. If you want to make it easier, you can use a dough hook in a stand mixer to knead the bread, but we like the arm workout.

• If your slow cooker doesn't have a very good seal on the lid, then you might want to put a tea towel under the lid to stop condensation forming and dripping on to your bread.
• Leave the loaf to cool for about 30 minutes before slicing, as it will collapse otherwise.
• Slow cooker bread will be flatter than oven cooked bread and it won't have that domed top, but it will still be delicious.
• Don't forget to add the baking paper, as this helps to lift the loaf out of the slow cooker and stops the dough sticking to the slow cooker pot.
• To make the bread look extra fancy, put a deep cross on the top of it when it goes in the slow cooker, as this encourages a crust to form. 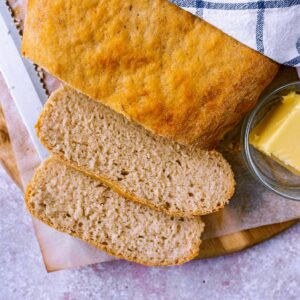 This slow cooker bread recipe is SO easy to make, with no rise time, and gives you the most delicious soft and fluffy bread - all done in your slow cooker.