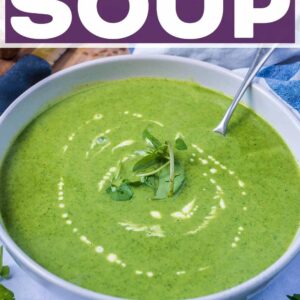 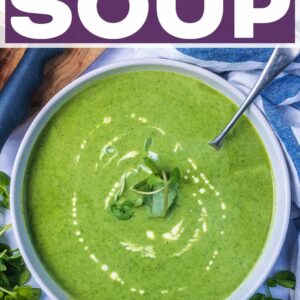 Watercress soup is a light, fresh and vibrant soup that can be enjoyed all year round. Full of goodness, it is so easy to make and ready in under 30 minutes. With a slight peppery flavour, this soup is a great way to get some extra greens in your diet.

Watercress soup is a popular in France (known as Soupe de Cresson) and Belgium (where my family are from) and it is a firm favourite in my family. Make with a base of shallots, celery and potato to give it some thickness and peppery watercress, this is a bright and comforting soup, that just feels super-nutritious.

If you are looking for some other ways to use watercress, then why not try our Easy Salad Jars or Mustard Potato Salad?

How to make watercress soup - Step by step

One: Heat the oil and butter in a large pan. Add the shallots and celery and cook on low until softened - about 5 minutes.

Two: Add the potato and stock. Simmer for 10 minutes.

Five: Blend until smooth. Add the milk and cream, stir and serve.

Watercress has a lovely peppery flavour when it is eaten raw, however once it is cooked in the soup, the peppery flavour lightenes and it has more of a vegetable flavour. Although it isn't usually thought of as being the most nutritious green, it is packed with nutrition.

Watercress is part of the Brassicaceae family of vegetables, which also includes kale, Brussels sprouts and cabbage. Watercress was considered a weed, and it was first cultivated in the UK in the early 1800s.

Watercress is very low in calories, making this a low calorie and low fat soup. It also contains over 100% of the RDI for vitamin K, which is a fat-soluble vitamin necessary for blood clotting and healthy bones. It is also a good source of vitamin E, vitamin B6, folate, pantothenic acid, phosphorus, potassium, sodium, thiamine, riboflavin, magnesium and copper

What to serve with watercress soup

We topped ours with some extra watercress and a drizzle of single cream to make it feel a little more indulgent. However you could leave it just as it is.

We also love serving this watercress soup with some crunchy croutons on top. We make our own easy croutons by chopping up some bread in to squares and drizzling over a little olive oil and a sprinkle of garlic granules and dried herbs. Put them in the oven for about 5 minutes to crisp up. Perfect for adding to soups and salads. Have you tried our Sourdough Croutons?

We also love soup with our Easy Bagels, Slices of Homemade White Bread, Cheesy Garlic Bread or Garlic and Rosemary Focaccia, which are all really easy and delicious homemade breads.

Store: This soup is always best eaten fresh, however if you do have leftovers then you can keep it in the fridge for up to 3 days. Let it cool down and then store in an air tight container in the fridge.

Freeze: This freezes really well and we always make a big batch to freeze to be able to enjoy in the colder months. The texture may be a bit different, but it will be fine once heated through. Allow it to completely cool first and then portion it out in to air tight containers or freezer bags (these are great for space saving as you can lay them flat) and then it will keep in the freezer for up to 3 months.

Defrost: Defrost in the fridge overnight.

Reheat: Once fully defrosted, you can reheat it in the microwave or heat it through on the hob (stovetop).

Where can I buy watercress?

You can either buy it loose at a market, or you can find it bagged with the other bagged lettuce in the supermarket.

This version isn't vegan as we have used butter, milk and cream, which gives a real depth of flavour and makes it feel a bit more indulgent. To keep it vegan, simply swap for oil instead of butter and use dairy free versions of milk and cream.

Yes, this can be gluten free if you use a gluten free stock and make sure that there is no cross contamination.

Why is my soup too thick/thin?

If your soup is too thick, then you may have cooked it at too high a temperature. Simply add a little more stock until it is the desired consistency. Equally, if it is too thin that you might not have had the heat high enough. Let it simmer a little longer to thicken up.

How to thicken watercress soup.

This isn't meant to be a thick soup. However, if you want to make it a little thicker then we have some tips. To thicken the soup, you will need to make a cornflour slurry. Simply mix together equal parts cornflour and water and then whisk that mixture into the soup. Usually 2 tablespoons of cornflour and 2 tablespoons of water mixed together does the job. You can use this tip for thin stews too.

Can you make watercress soup in advance?

Yes, you can make this in advance and then leave it to cool in the pan, cover and refrigerate the whole pan. Then, when you want to serve it you can put the whole pan (uncovered) on the hob and heat it through.

• Use a stick blender to blend this soup. If you are going to use a jug blender, make sure it cools down first, as putting hot soup in can cause it to explode.
• If you are making this soup for young children, then use a low salt stock.
• You may need to add a little bit more stock to the soup after blending, depending on the consistency that you want. If you have cooked the soup on too high a heat, then it will need more stock otherwise it will a little thick. It is meant to be a thinner soup. 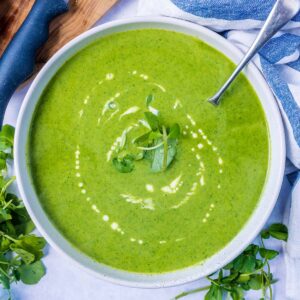 Watercress soup is a light, fresh and vibrant soup that can be enjoyed all year round. Full of goodness, easy to make and ready in under 30 minutes.