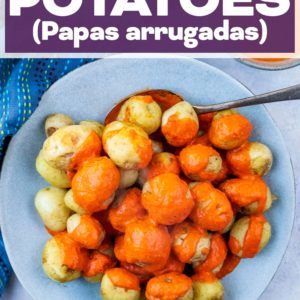 This is a sponsored post for Seasonal Spuds
Papas arrugadas, also known as Canarian Potatoes, basically means 'wrinkled potatoes' and it's a traditional potato dish that you will find across all the Canary islands. Boiled salted Cornish new potatoes smothered in a spicy and smokey red pepper sauce (you can use a green sauce instead if you want it more mild).

They are called wrinkled potatoes because they are cooked in very salty water so they shrivel up and then they are left to steam in the pan once drained, so the salt gives them a bit of a crusty skin. They are then covered in a delicious sauce that you will want to put on everything!

Just because you might not be on holiday now, doesn't mean you can't enjoy all the same flavours.

What are Canarian Potatoes?

Canarian potatoes are basically salty small potatoes and then they are smothered with a sauce - either Mojo Picon (which is what we have used) or Mojo Verde (which is a milder herby sauce). The reason why they are so salty is because when they were originally made, they were made with sea water because fresh water was often short on the islands and they made the best they could with what they had. Luckily it resulted in super delicious potatoes.

If you have had them when you have been on the Canary Islands, then these might not taste exactly the same. The recipe will differ depending on the potatoes and salt used and the water to salt ratio used.

One: Put the potatoes into a pan with all the salt and cover with boiling water. Bring to the boil and then simmer for 20 minutes until softened.

Two: Meanwhile, put the rest of the ingredients in a blender and blend until smooth to make the sauce.

Three: Once the 20 minutes are up, drain the potatoes and then put them back in the pan and on a very low heat for about 5 minutes, shaking regularly so the skins wrinkle.

Four: Put the potatoes on a plate and smother with the red sauce.

What potatoes to use

We used Cornish New Potatoes, (which are now available in Tesco) and they are the first new potatoes of the season grown on the UK mainland. Being the most south westerly point of mainland UK, means that Cornwall is the first part of the country to warm up in the spring. With nowhere in Cornwall more than 20 miles from the sea, it also benefits from a milder maritime climate, with sea breezes that help to keep the fields largely frost-free.

Cornish farmers work with the natural landscape and its particular microclimates to spread their planting and harvesting across the season so they can harvest little and often for maximum freshness.

Cornish New Potatoes are true new potatoes - harvested while the leaves are still green above the ground. This gives them their distinct mild, sweet taste and delicate fluffy skin - they also hold their shape well when cooked, due to their firm, slightly waxy texture.

What to serve them with

This is a great side dish that goes with almost anything. Here are some of our favourite recipes to serve it with:

Potatoes are a great source of fibre and potassium and they are naturally fat free. However, the Mojo Rojo sauce is heavy on oil, so this isn't a low calorie dish if that is something that concerns you.

Do you have to peel the potatoes first?

No, don't peel the potatoes. The skin has lots of fibre in it and the wrinkly skins is what makes this recipe so special.

What size do you need to cut the potatoes in to?

This will depend on the size of your potatoes. As we have used new potatoes, we cut the bigger ones in half and leave the small ones whole.

How do I know when the potatoes are cooked?

The cooking time will depend on the size you cut your potatoes. However, you will know your potatoes are cooked when they are tender when you put a fork through them.

Can you make Canarian potatoes in advance?

Can you reheat Canarian potatoes?

Yes, you can put them back in the oven for about 15-20 minutes to reheat. However, if we have any leftovers of this (which doesn't happen very often), then we just eat it cold as it tastes just as good that way. If you do reheat it, add a squeeze of lemon before serving to freshen it up a bit.

How to store Canarian potatoes?

If you have any leftovers, they will store in an air tight container for up to 2 days. Beware, the sauce does get spicier the next day.

• Turn it in to a main dish by adding some chopped up vegetables and chunks of chicken breast (or thighs/legs) or halloumi and roasting them at the same time (timing may vary though).
• The nutritional information for this recipe won't be accurate, and will be an overestimate. This is because they don't keep all the salt on them. 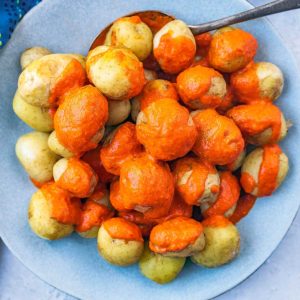 Papas arrugadas, also known as Canarian Potatoes, means 'wrinkled potatoes' and are a traditional potato dish popular across all the Canary islands.