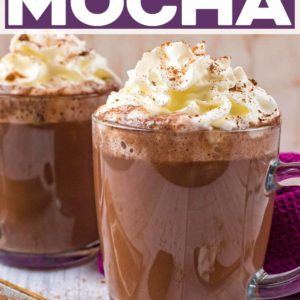 Who needs expensive coffee shops or fancy coffee machines when you can make a cup of this delicious Cinnamon Mocha at home in minutes? It's like a hug in a mug and a lovely way to wake up someone special this weekend. A rich chocolaty base with hints of cinnamon and topped with whipped cream.

This is the perfect 'curl up on the sofa on a Sunday afternoon' kind of hot drink and perfect for a cosy autumn hot drink vibe. As far as I am concerned, mochas are where it's at when it comes to hot drinks. It's what I always order in coffee shops, so we have been making our own at home to save on money and give them a lighter twist.

Coffee is what keeps us functioning in life, and chocolate pretty much makes the world go round, so whoever thought to put them both together is pretty much a genius and deserves some kind of coffee making medal. I am sure there is an awards ceremony for that.

It's the perfect combination of bitter and sweet and you know what makes it even better? Cinnamon! Who says cinnamon is just for Christmas? Not us, that's for sure!

Looking for some other delicious ways to enjoy cinnamon? Why not try our Cinnamon Baked Apples, Grilled Peaches with Cinnamon and Honey, Apple Cinnamon Pancakes, Cinnamon Flapjacks, or Christmas Cheesecake.

When the colder seasons come, we are all about everything cinnamon. Cinnamon desserts, cinnamon hot drinks and a pinch of cinnamon in hearty meat stews. Not only does it add lots of flavour, but it is plenty of health benefits too.

You can change this mocha up every time and make something different. We like to swap the cinnamon out for some ground ginger instead, or do a chocolate orange combination with a little squeeze of orange juice and some zest. Love a chocolate mint combination? Add some peppermint extract in - that's always a Christmas favourite in our house.

What to serve a Cinnamon Mocha with

Is there anything better than a 10 minute break with a coffee and some kind of sweet treat? I don't think so! Here are some of our favourite sweet treats that would go perfectly with this chai tea latte:

Can I make this an iced mocha?

Yes, you can easily make this in to an ice mocha by making the chocolate syrup and adding it to the coffee and then pouring in cold milk and pouring it over ice cubes. The perfect drink for a hot day!

Can I double this this?

Yes, you can easily double this recipe without changing the method.

Can I make a homemade mocha in advance?

No, we would only recommend making the whole coffee from fresh. You can however make the chocolate syrup in advance and then store it in the fridge until you are ready to use it.

• We have mixed together maple syrup and cocoa powder to make a chocolate syrup, however you could use a store bought syrup if you prefer.
• You can swap the cinnamon for ground ginger or use a mixture of the two. 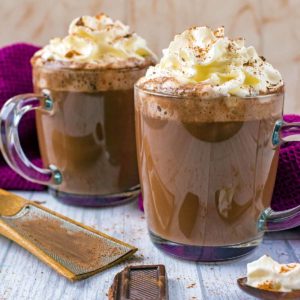 Who needs expensive coffee shops or fancy coffee machines when you can make a cup of this delicious Cinnamon Mocha at home in minutes.