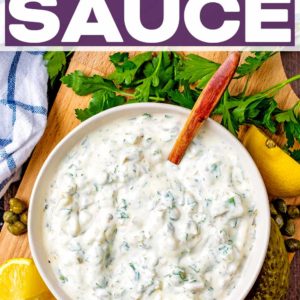 Homemade tartare sauce is the perfect accompaniment to fish and chips, or our epic fish finger sandwich, and it's super easy to make too. A creamy sauce with chunks of gherkin, this easy tartare sauce recipe is better than any store bought version and ready in just a couple of minutes.

For us, tartare sauce is what makes fish and chips. Sure, it's great by itself, but this creamy sauce takes it to the next level. With just a few ingredients, many of which you probably already have in your kitchen, you have a sauce that goes with so many different meals.

One: Add all the ingredients to a bowl.

Two: Mix well to combine everything.

Where does tartare sauce come from?

Little is known about the inventor of tartare sauce. The common theory is that it was most likely invented by the French and was first made at some point after the 18th century.

However, some people say it is named after the Tatar tribe which came from Eurasian Steppe to occupy parts of Ukraine and Russia. The Tartar tribe introduced finely minced meat eaten raw which became known as hamburg steak. The sauce they used on Steak Tartare became known as Tartare sauce.

There aren't many ways to change this classic sauce, however there are a few changes that can be made. You don't have to add shallots and mustard, but we think they are delicious additions.

We have used parsley as the herb in this sauce, however you could use dill instead. Dill goes really well with fish too. You could even use a mixture of dill and parsley.

If you want to make a lighter version of this sauce, you could use reduced fat mayo, or you could swap half the mayo for Greek yogurt. It wouldn't be as creamy, and the creaminess is what makes this sauce so delicious.

Our homemade tartare sauce goes perfectly with fish, so why not try serving it with one of our fish dishes:

We also love this as a dip for chips. Why not try our Best Ever Air Fryer Chips?

This is quite an indulgent calorie heavy sauce. However, you can make it lighter by using light mayo and doing half and half with Greek yogurt. This would change the flavour though.

It is an indulgent creamy sauce and has a subtle crunchy from the gherkins, and a nice tang from the lemon juice, with lots of freshness from the parsley.

What do I do with the rest of the capers in the jar?

You might be wondering what to do with the rest of the capers. Well, don't waste them as there are so many ways to use them. They go in a Caesar Salad Dressing, they are delicious on top of salads, and we like them in pasta dishes and on top of smoked salmon.

How to store tartare sauce?

This is always best made fresh, and it only takes a couple of minutes to do. However, if you do have leftovers then it can be kept in an air tight container for up to 3 days. Just give it a good mix before serving.

Can you make vegan tartare sauce?

• If you are making your own mayonnaise, my top tip is to add the oil a little at a time.
• Feel free to adjust the amount of gherkins, capers, lemon juice and mustard to suit your own tastes. Add a little bit and taste and then you can always add more.
• We recommend putting the sauce in the fridge for 30 minutes before serving, as it lefts the flavours all come together.
• For a lighter sauce, swap half the mayo for Greek yogurt. 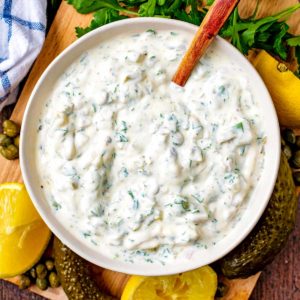 Homemade tartare sauce is the perfect accompaniment to any fish dish. Better than any store bought version and ready in just a couple of minutes.