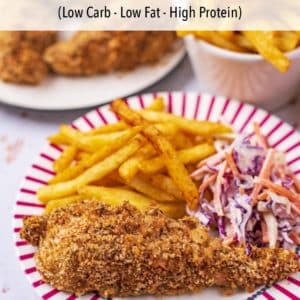 You can get all the crispiness and flavour of KFC chicken by making it at home - plus it's healthier and cheaper too. Seasoned and breaded chicken breasts that are baked to crispy perfection for the Healthy KFC alternative. Put it in to a burger bun for a homemade Zinger Tower Burger.

If you are looking for some other breaded recipes to try, they why not try our Salmon Fishcakes, Homemade Fish Fingers, Air Fryer Chicken Nuggets or Parmesan Chicken Bites.

One: Prepare the spice blend

Two: Put the bread in to a food processor and blend to make breadcrumbs.

Three: In a bowl, combine the breadcrumbs with the spice blend. Season with salt and pepper.

Five: Whisk the egg and put the flour onto a plate.

Six: Coat the chicken in flour, then dip in the egg. Transfer to the bowl with the seasoned breadcrumbs and coat completely.

Seven: Put the coated chicken on a baking tray and put in a pre-heated oven at 220°C/400°F for 40 minutes. It may need longer, depending on the size of your chicken pieces.

It's not called Healthy KFC for nothing! But seriously, its healthier.

One thing a lot of us would like to cut back on in a bid to be healthier, and have more disposable income, is fast food and convenience food. Sure, it's easy to just rock up to a drive-thru and put in your order, but who has the money to do that all the time?

Not only is making it yourself healthier, as you can control exactly what goes in to it and portion control, but you have the satisfaction of having made the delicious alternative yourself. With minimal effort too!

If you want to get that exact KFC flavour, then you are doing to need to deep fry the chicken to get it super crispy. But baking it gets it crispy enough, without a load of extra calories from the oil.

We have coated ours in breadcrumbs and baked it, rather than dipping it in flour and frying it, so there is going to be a taste difference there. But this is a healthier version after all. Also, KFC using MSG in their recipe and we gave that a miss too.

The exact spice seasoning mixture in KFC is a closely guarded secret. However, after a lot of taste testing, we have come up with something that comes very close. You can adjust the spices to suit your own tastes.

One of the best things to order at KFC is the Zinger Tower Burger. You can recreate that at home too by taking a piece of this breaded chicken and putting it in a bun with some cheese, lettuce, some Restaurant Style Salsa and one of our Homemade Healthy Hash Browns.

What chicken to use

To make a healthy KFC, we used chicken breasts, not only to keep it lean but because we were serving it in a burger and didn't want the bone in it. However, if you just want to use your hands and bite straight in to some chicken, then you could use wings, drumsticks or thighs.

Here are some suggestions of things to serve with this Healthy KFC:

The exact KFC recipe is a closely guarded secret. However, with a few taste tests and some experiments ourselves we came up with a pretty great homemade version. It is a mixture of paprika, thyme, oregano, garlic, ginger, salt, pepper and mustard.
If you prefer one flavour and don't like another as much, feel free to change the quantities. Use this recipe is a base. We might add some chilli flakes next time.

This homemade KFC is really easy to make gluten free, as most of the ingredients are gluten free already. Just use some gluten free breadcrumbs and flour for the coating and you are good to go.

Can you cook healthy KFC in the air fryer?

You can get this chicken even crispier than the oven by using an air fryer. Simply follow the recipe as below and then put it in your air fryer for 20 minutes until the chicken is cooked through

How do you store healthy KFC?

If you have leftovers, then they can be stored in an air tight container and kept in the fridge for 2 days. You can then slice them up and add to salads and sandwiches.

It is never going to taste exactly the same, as it is a lightened up version, and it is not deep fried, but this Healthier KFC is still very tasty.