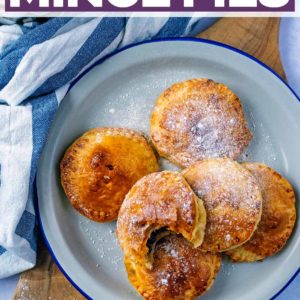 These Puff Pastry Mince Pies are a must make this Christmas. Much easier to make than traditional mince pies, but still with all the delicious festive flavour. Crisp, flakey pastry, bursting with sweet fruit and spices. Ready in under 30 minutes, these are an easy Christmas treat and a real family favourite.

Although mince pies are traditionally made with shortcrust pastry, we have swapped it for puff pastry because it's easier to use and once cooked it puffs up and is deliciously crispy and flakey. These are perfect for when you are short on time, but still want a homemade festive bake.

It still has the traditional mincemeat filling, which we have jazzed up with some added dried cranberries and lemon.

If you are looking for some other easy Christmas bakes to try, then why not try our Cinnamon Biscuits, Christmas Tree Brownies, Cranberry Bread, or Healthy Christmas Cookies.

Two: Mix together the mincemeat, apple, cranberries and lemon zest.

Three: Spoon one tablespoon of the mincemeat mixture onto the middle of the smaller pastry disks.

Four: Place the larger disks over the mincemeat and use a fork to gently crimp the edges together.

Five: Using a small sharp knife, poke two small holes in the top of the pies. Brush with the egg and put onto a lined baking tray.

What is a mince pie?

If you are in the UK, then unless you have been living under a rock, then you know exactly what these are. You have probably been brought up eating them every Christmas and they divide households - it is a love or hate kind of thing. We are firmly in the love side, as we can't get enough mince pies.

If you live outside of the UK, then there might be some confusion as to what these are. But, don't worry, they don't contain minced beef. But, that is where they get there name from, as back in the day, they were filled with minced meat, suet, dried fruits, and a load of spices. Modern day mincemeat no longer contains meat, but the name has remained.

The ingredients are traceable to the 13th century, when returning European crusaders brought with them Middle Eastern recipes containing meats, fruits and spices. Mince pies became traditional and popular at Christmas time in the Victorian era, but they had become sweeter and and smaller in size, like the ones we know today.

What to serve with puff pastry mince pies

Although mince pies themselves divide the country, those that can agree that mince pies are delicious, can't usually decide on how to serve them. Some like them plain, others like them with cream, brandy butter, custard or ice cream. Some people heat them up, and others like them cold. There are so many options.

We love ours with a hot drink. Snuggling up on the sofa after a long winter walk, these go down so well with a hot cup of something. We have lots of hot drink recipes for you to try. Why not try one of these:

A lot of store bought puff pastry is vegan - just watch out for ones that say all butter. You can also get some great vegan mincemeat, that doesn't use suet. You will also need to leave out the egg wash.

If you use gluten free pastry, and make sure there is no cross contamination, then these can be gluten free.

Once fully cooled, they can be stored in an air tight container at room temperature for up to 3 days.

Yes, these freeze really well. Once fully cooled, put them on a baking tray and in the freezer - this is called flash freezing. Once they are frozen, you can put them in a freezer bag in the freezer for up to 3 months and then just take one out as and when you want one.

What size pastry cutter do I need?

We used two sizes - a 6.5cm and a 7.5cm. That's because the top circle needs to be bigger, to go over all the filling.

How long do you cook puff pastry mince pies for?

Ours took 15 minutes in the oven, but every oven cooks differently. Keep an eye on them from 12 minutes, as you are looking for the pastry to be golden brown.

• Make sure you chop the apple up very very small, so it mixes in well with the mincemeat.
• Add a splash of brandy or rum for extra flavour. Not too much though, as you don't want it to be soggy.
• Make sure you transfer them to a wire rack to cool, as this will prevent them from getting a soggy bottom.
• Add some extra texture with some chopped nuts. Pecans and walnuts work well. 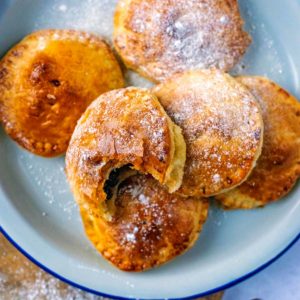 Puff Pastry Mince Pies are a must make this Christmas. Much easier to make than traditional mince pies, but still with all the delicious festive flavour.