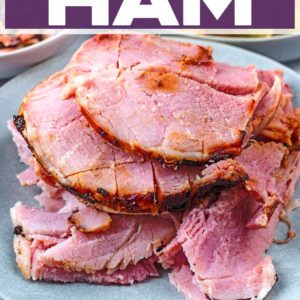 This Slow Cooker Gammon recipe is the easiest was to cook a gammon joint and it gives you the most deliciously tender, fall apart ham, that is perfect for a roast dinner. Minimal prep time and just a few ingredients, this gammon joint is cooked in cider and apple juice with some spices and then glazed with honey and mustard and baked to perfection to finish it off.

This slow cooker ham recipe is so simple, but results in the best ham. It has a slightly sweet taste from being cooked in the apple juice and cider, and then being glazed with honey and it just falls apart when carving. Let the slow cooker do all the work and then finish it off in the oven for a crispy skin.

If you are looking for some other meat recipes to go on a roast dinner, then why not try our Slow Cooker Roast Beef, Honey Roast Duck, Roasted Turkey Breast or The BEST Roast Chicken?

How to cook gammon in the slow cooker - Step by step

One: Put the gammon joint in the slow cooker, fat side up. Add the carrots and onions around the side of it.

Three: Cook on high for 5 hours or low for 7 hours.

Four: Preheat your oven to 200°C/400°F/Gas 6. Remove the gammon form the slow cooker and put onto a baking tray. Using a sharp knife, score the gammon in a criss-cross pattern.

Five: Mix together the honey, sugar and mustard.

Six: Pour the honey mixture over the gammon. Put in the oven for 30 minutes, until the top has crisped up.

What is the difference between ham and gammon?

There seems to be some confusion around this, but they are essentially the same thing. Gammon is the raw joint, which you can buy smoked or unsmoked, and it comes from the back leg of the pig and needs to be cooked before eating. Ham is cooked, so when gammon is cooked it becomes ham.

Liquid - We used apple juice and cider, as it adds a nice tanginess, and some sweetness too. However, you could just use water which would make this an easy and budget friendly dish. However, there are other options when it comes to the liquid too. You could use cola, which makes it nice and sweet, but not too sweet. You can use full fat or diet coke and you can even use cherry cola.

Pineapple juice works instead of apple juice too, but it does give it a tangier and sweeter flavour. In terms of the amount of liquid, we like to use enough to almost cover the gammon joint.

Glaze - We went with honey and mustard, which is a classic flavour flavour combinations, especially when it comes to ham. But, if you want to give it a more fruity vibe, then why not mix together some mango chutney and sweet chilli sauce and smother that over as a glaze?

Pulled ham - We have cooked this so it can be sliced and served as you would another roast meat. However, if you wanted to pull the meat apart to use like you would pulled pork, then you just need to leave it in the slow cooker for another 2 hours until it's really tender and just falls apart with 2 forks.

What to serve with slow cooker gammon

This slow cooker gammon goes with so many different things. We love serving it up as a roast dinner with any (or all!) of the following side dishes:

We also love serving it with Creamy Mashed Potato and some slaw. There are lots of different slaw recipes for you to try on the blog - why not try our No Mayo Coleslaw, Crunchy Asian Slaw, Broccoli Slaw or Mexican Coleslaw?

Store: You can store the leftovers of the slow cooker gammon wrapped up in the fridge for up top 3 days.

Freeze: You can wrap slices of the ham and put them in a freezer bag and they will keep for up to 3 months.

Defrost: Defrost the individual slices of ham in the fridge overnight.

Reheat: If you want the ham warm again, you can wrap the slices in foil and warm them in the oven.

This makes 8 generous servings, so if you have leftovers them make sure that none of it goes to waste, as there is so much that you can do with it. We love chopping it up and stirring it in to our 10 Minute Cream Cheese Pasta. You could also use it to make an epic ham sandwich, with some other roast dinner leftovers too.

Why not make our Leek and Potato Soup and stir some chunks of chopped ham in to it or use it instead of bacon in our Healthy Carbonara.

You can use it in a quiche or omelette, or even put it on a pizza. Why not use it instead of chicken on our BBQ Chicken Pizza?

Do I have to add liquid to the slow cooker?

No, you don't actually have to add any liquid to the slow cooker at all. But, we find that adding at least 250ml (whether that is water, apple juice or cider), really helps to keep the meat moist. But, it won't burn if you don't add any liquid.

How long do you cook gammon in the slow cooker?

We cooked ours for 5 hours on high or you can cook low for 7 hours.

How to tell if gammon is cooked?

To see if you gammon is cooked, put a knife in to the thickest part and pull it out to see if it is tender. If it is hard to pull out, and still feels fleshy and springy, then it isn't cooked and it will need to go back on for 30 minutes more. The best way to tell if gammon is cooked is to use a meat thermometer. Ham should be 62°C (145°F) when inserted in to the thickest part.

What should I do with the leftover liquid in the slow cooker?

Don't waste this, as it can be used as the stock in soups and stews. Why not look at all our Soup Recipes for inspiration?

What slow cooker to use.

There really is no rule here, just make sure that the gammon you are using can fit in your slow cooker. We use a Crock Pot DuraCeramic Slow Cooker and we love it. What I love most about it is that you can put the bowl insert on the hob too, meaning you can brown meat, sauté vegetables or thicken gravy in it. I also love that it has a clear lid, as I am so impatient that I want to keep looking and seeing what it is doing. If you don't have a clear lid, then lifting it to see will release lots of the heat and add to the cooking time.

• If you didn't want to use alcohol in this slow cooker gammon joint, then you could just use apple juice and replace the cider with more apple juice.
• Make sure you remove the plastic that coats the skin of the gammon, as this should not be cooked.
• If you wanted to try something a little different for the glaze, then mix together some mango chutney and sweet chilli sauce and smother it on the gammon.
• Before putting the gammon onto a baking tray, line it with foil. This will prevent the honey mixture sticking to the tray, which can be very difficult to clean. 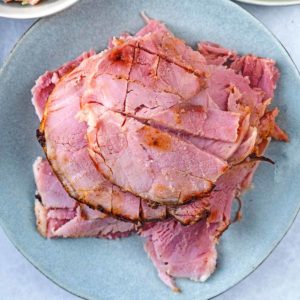 This Slow Cooker Gammon recipe is the easiest was to cook a gammon joint and it gives you the most deliciously tender, fall apart ham.