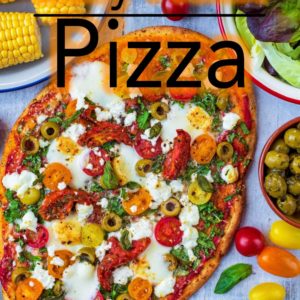 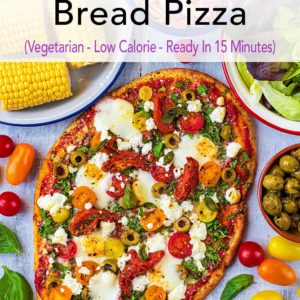 This Naan Pizza is a really quick and easy meal for when a pizza craving hits - ready in just 15 minutes. A soft and chewy base that needs no preparation and you can just load all your favourite toppings on. Everyone can have their own mini pizza, so everyone gets a topping they like.

When those pizza cravings hit and you need a pizza on the table in under 15 minutes, then grab a ready made naan bread and load it with sauce, cheese and vegetables. You can of course make your own naan bread easily enough, but that will add time on to this recipe.

Naan Bread Pizzas are a great way to get kids involved in the kitchen, as they can help with spreading the sauce on the bread and then scattering their favourite toppings.

You can use vegetables to make faces and get them asking questions about new (to them) foods. Anything to get them excited about vegetables, right?

One: Make sure your naan bread has the flat side down and brush the top with a little oil.
Two: Spread the sauce on the naan bread.Three: Add the spinach.
Four: Sprinkle the Parmesan on the bread.
Five: Add the tomatoes and sun-dried tomatoes
Six: Add the olives.
Seven: Sprinkle the mozzarella and goats cheese on top.
Eight: Add basil and put in a preheated oven at 190°C/375°F/Gas 5 for 8-10 minutes.

What is a naan pizza?

Well, a naan pizza is pretty self explanatory - it's a pizza that is made with a base of a naan bread. Using a naan bread means that you can have an easy to adapt pizza that is ready in just 15 minutes. That's less time than it would take to decide what to order from a takeaway menu.

Although naan bread, which is a traditional Indian flatbread, is usually used to mop up the sauce of a delicious curry, it makes an epic pizza base.

What can you use instead of a naan bread?

If you don't have a naan bread, then you have a few options that still make this a really simple pizza. Swap it for a few pita breads - this is a good way to do individual pizzas and then everyone can top their own. You could also make our Easy Homemade Flatbread to use as a base.

If we are really short on time or on a budget, then a couple of tablespoons of tomato puree with herbs will do the job of a pizza sauce. Otherwise, this is a good way to use up leftover marinara or pasta sauce. Fancy something different? Why not make some of our Pizza Sauce or even Healthy BBQ Sauce and spread that on the base or use pesto.

If you are going to use a store bought pizza sauce, go for the best quality that you can afford. It adds so much flavour to the naan pizza, and the really cheap ones tend to be very watery with not much flavour.

Pizza topping choice is a very personal thing, and everyone has their preference. Usually on pizza night someone has to compromise and ends up picking a topping off that they hate.

But, what if everyone could have their own pizza and whatever topping they wanted! If that sounds good to you, then use mini naan breads to make your pizza, rather that a larger one to share.

Really, anything goes when it comes to pizza toppings. Cheese is a must, of course. But you could go with cheddar, mozzarella, parmesan, goats cheese or a mix of all of them.

Underneath the cheese we usually go with some kind of chunky topping with tomatoes and olives and put them on a bed of chopped up spinach for some added greens. A few dots of pesto adds loads of flavour to this naan pizza.

If you want to add some protein to this pizza, then chopped up cooked bacon or sausage is always a good choice. It's also a great way to use up leftover Slow Cooker Whole Chicken.

We are big fans of a huge green salad on the side of a pizza. It's a nice balance of light and heavy. For the base of a green salad, use a mixture of greens. Traditional salad greens like little gem and romain are good, and then we like to give it a nutrient dense boost by adding some spinach and kale too.

If it's a cold day, then a slice (or two) of this naan pizza dipped in to some warming soup is definitely a good choice. Why not try our Creamy Courgette Soup or Tomato and Basil Soup.

Can a naan pizza be made in advance?

You can make these pizzas about an hour in advance and then just put them in the oven 10 minutes before you are ready to eat. You don't really want to make them much further in advance than that, because the bread will start to get soggy.

Can cooked naan pizza be frozen?

To freeze cooked pizza, firstly wrap each individual slice in cling film (Saran wrap) and then in aluminium foil (this helps protect the pizza from freezer burn). Then put the wrapped pizza into a freezer bag. This way the pizza will keep in the freezer for up to 2 months.

Can I reheat naan pizza from frozen?

The best way to reheat frozen pizza is in the oven. Do it in a microwave and you will end up with limp, soggy pizza!
To reheat in the oven, preheat your oven to 230°C/450°F/Gas 8. Place an individual slice directly on the middle shelf and cook for 15-20 minutes. This will ensure the pizza is cooked through and the crust remains nice and crisp.

If you’ve tried this naan pizza, or any other recipe on the blog then let us know how you got on in the comments below, we love hearing from you!
Tag us in your creations on Instagram @hungryhealthyhappy - we love sharing photos when people make our recipes. You can use the hashtag #hungryhealthyhappy too. Naan bread makes a great base for quick and easy weeknight pizza. This Easy Naan Pizza is vegetarian, but the topping combinations are almost endless.